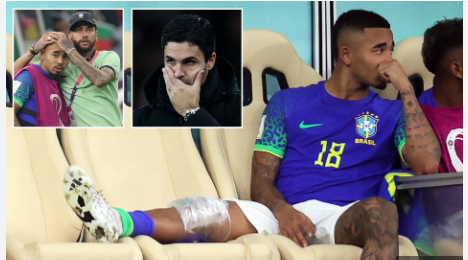 The World Cup is over for Gabriel Jesus after he sustained a injury against Cameroon and he might be missing when Arsenal returns to continue their title bid on Boxing Day.

However, pundits claim that the development has ensured a new priority for Mikel Arteta ahead of the January winter transfer window.

Before now, the Gunners were understood to be seeking a midfielder and a winger but with this development, they could go ahead to add a centre forward which would in turn be a blessing of having more squad depth for the EPL title challenge.

Meanwhile, Shakhtar Donetsk winger Myhaylo Mudryk remains the priority for Arsenal as per Fabrizio Romano, with the player plain about his desire to play in the Premier League.

Mudryk has been cited by the Metro admitting he would prefer a move to the Emirates Stadium rather than the Bernabeu and Madrid, he said: “From a purely hypothetical perspective if there was the option of being a bench player for Real Madrid or a starter for Arsenal, I’d probably choose Arsenal.

“But it’s a tough question and involves a lot of factors in my answer. I would first want to know from the head coach that even if I wasn’t a guaranteed starter, that I’d receive a chance. Essentially I need to hear directly from the manager what he envisages my role in his side to be.”