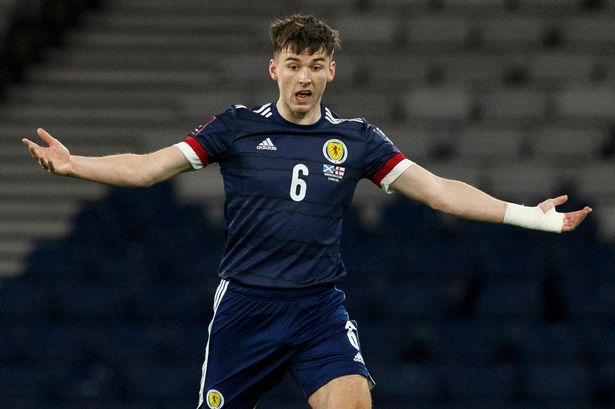 This morning there was an article ravaging this morning about Kieran Tierney “disrespecting the Queen” by removing his black armband and whether he should be punished by the fans for doing it.

This is the perfect response to that article from someone who watched the whole incident and wants to set the record straight.

There’s a saying, “Every picture tells a story “.

And that black armband lying on the side of the pitch doesn’t exactly tell the full story. Prior to the Scotland v Ukraine match both countries assembled in a line for both National Anthems.

Scotland had theirs first. They had a lone bagpiper. All Scottish players sang their National Anthem. All…. barring one Scottish player. That player was yours truly Kieran Tierney. I suppose you want to condemn him for that too.

After the both National Anthems, both countries formed a circle in the middle of the pitch. Images of the late Queen was on all screens around the stadium. All players applauded the late Queen by clapping for a full minute. Kieran Tierney clapped for the full minute.

Kieran Tierney takes off the armband and respectfully places the armband to the side of the pitch. He doesn’t throw it like some ignorant people say he did. And it’s the linesman that tosses the armband aside.

As for it being a Celtic thing, well think again. There were a few Celtic players out there on the pitch playing. That blows that little theory out of the window. So why should Kieran Tierney be condemned?

That’s a very strong word (condemn). It’s usually used for rapists, murderers and armed robbers,,,, not for a person not wearing an armband. Obviously the writer writing this fairytale story did not watch the Scotland v Ukraine match. I did.

I just watched the whole lead up to the match all over again to get my facts to this matter correct before typing and making a fool of myself. Something maybe the writer should have done before posting about a picture of an armband on the side of a football pitch that belonged to Kieran Tierney.