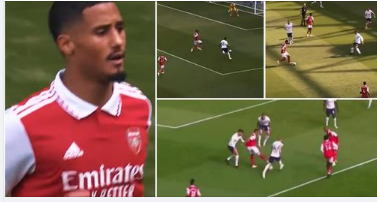 A single point separated the two sides going into the match at the Emirates Stadium, with Arsenal in first and Tottenham in 3rd.

The Gunners managed to extend the gap over their fierce rivals to four points with a superb 3-1 victory.

Arsenal ran away with it in the second half as goals from Gabriel Jesus and Granit Xhaka gave them all three points.

Saliba was arguably the best player on the pitch in his side’s victory.

The Frenchman has been sensational throughout the 2022/23 season and he kept up his form with an immense display.

Saliba was a rock at the back throughout and was showed incredible composure when in possession.

His best moment in the match came in stoppage-time when he had Arsenal fans on their feet after pulling off a filthy nutmeg on Oliver Skipp.

The youngster found himself in Tottenham’s box and under pressure from multiple Spurs players.

But he expertly maintained possession as he nutmegged Skipp before laying the ball off to a teammate.

Saliba’s reputation is growing at a rate of knots and Cesc Fabregas is well aware of just how talented he is.

The former Arsenal man was covering the game as a pundit for BT Sport and he waxed lyrical about Saliba after the match.

“I would like to mention a special name that was so good and made it look so easy was Saliba. I was at Monaco playing St Etienne, an Arsenal scout asked me: ‘Keep an eye on Saliba, I want to sign him’. I was on the bench so had a good look at him, he was 18/19 and was the best player on the pitch,” he said on BT Sport.

“That shows the potential of the guy. He just makes it look so easy! He can be Arsenal’s centre-back for 15/20 years.”

Saliba is just 21 years old but he is fast becoming one of the Premier League’s best centre-backs.

It’s scary to think how good he could be once he reaches his prime.

ALSO READ:  VIDEO: Nelson With Another Beautiful Goal - 3-0
Related Topics:
Up Next