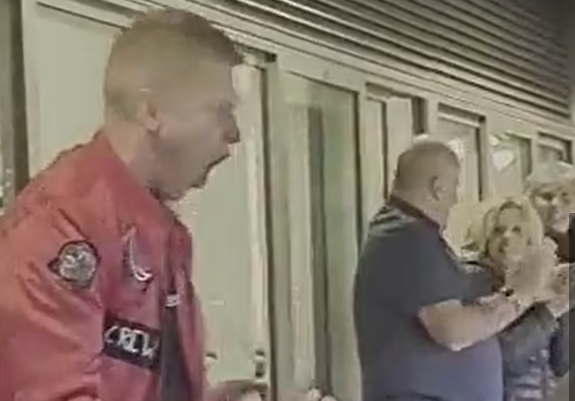 With the score at 2-2, 21-year-old Saka stepped up to put his side ahead from the penalty spot in the 76th minute after Thiago had clipped Gabriel Jesus in the area.

The forward slotted low past Allison to score what was ultimately the winning goal, and, in a video shared on social media, the injured Gunners defender can be seen cheering from the stands as the ball hits the back of the net.

Zinchenko is out injured with a fresh muscle injury after missing large parts of the season with a calf issue.

Standing in a box at the Emirates in a red coat after meeting Gunners legends Tony Adams and David Seaman on the pitch before play, the Ukrainian punches the air as he looks to the skies after his team-mate slots home, before letting out a roar in celebration.

Zinchenko enjoyed that one. 😂 pic.twitter.com/EyHSUIgaRQ

It’s unclear how long he will be out for, and Takehiro Tomiyasu filled in at left-back in the game against Jurgen Klopp’s side.

Arsenal moved back to the top of the Premier League with the victory, and lead Manchester City by a point after picking up eight wins from their opening nine games of the season.

Zinchenko, who is injured, was on the field before kick off with Arsenal legend Tony Adams

Zinchenko, who is injured, was on the field before kick off with Arsenal legend Tony Adams

Gabriel Martinelli had given Arsenal the lead in the opening minute of the game after he lost Trent Alexander-Arnold and finished well to send the home fans into ecstasy.

Darwin Nunez hit back for Liverpool before Saka poked home to make it 2-1 just before half time, but Roberto Firmino squared things up again in the second half.

Saka however delivered from the spot to earn his side the three points in a tightly-fought contest, which proved to be the next step in the Gunners’ attempts to prove they are title challengers this season.

VIDEO: What A Beautiful Shot By Saka – LEEDS 0 – 1 ARSENAL