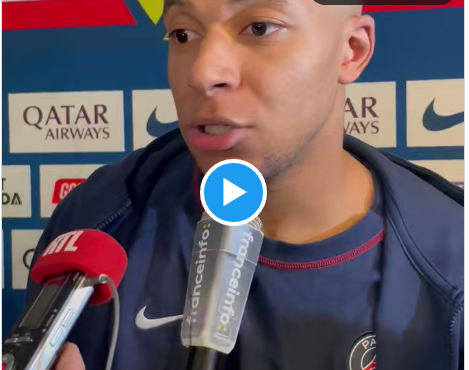 Mbappe scored a hat-trick in the World Cup final, including a penalty in the shootout.

However, that still wasn’t enough to lead France to glory.

Instead, it was Martinez and Argentina celebrating after a thrilling 3-3 draw and penalty shootout triumph.

It was heartbreak for Mbappe, who claimed the Golden Boot as a consolation.

Meanwhile, Martinez claimed the Golden Glove and had Mbappe at the forefront of his celebrations after winning the biggest prize in football.

In the dressing room afterwards, he called for there to be a ‘moment of silence’ for Mbappe.

Then, during Argentina’s open-top bus parade in their home country, Martinez was seen holding a Mbappe doll.

It all seemed a bit unnecessary.

It even led to an official complaint from the French Football Federation.

Speaking in an interview with Ouest-France, FFF president Noel Le Graet said: “We have launched different procedures. It is very shocking. These are boys who have given the best of themselves for the France team to succeed. It is important that we support them. I wrote to my counterpart from the Argentine Football Association. I find these excesses abnormal in the context of sports competition, and I find it difficult to understand. It goes too far. Mbappe’s behaviour was exemplary.”

What did Mbappe say about Martinez?
But now, Mbappe has responded.

The striker returned to domestic football with Paris Saint-Germain on Wednesday evening.

And he returned with a vengeance as he scored a 96th-minute penalty to help PSG beat Strasbourg 2-1 in Ligue 1.

And, after the match, Mbappe was asked about Martinez’s celebrations.

How would he respond?

Well, it provided a classy answer.

When asked about Martinez, Mbappe said: “I talked with him after the match. i congratulated him. For him it was a life goal. For me too, but I lost, so I have to be a good sport. Celebrations are not my problem, I don’t waste time on such trivial things.”

“I talked with him after the match. i congratulated him. For him it was a life goal. For me too, but I lost, so I have to be a good sport. Celebrations are not my problem, I don’t waste time on such trivial things.”pic.twitter.com/uJwOkFdGPo

A class act on and off the pitch.

Fair play to Mbappe for not being drawn into a war of words between him in Martinez. Instead, he proved that he’s more mature and humble to dismiss the mocking and concentrate on his incredible football ability to do his talking.