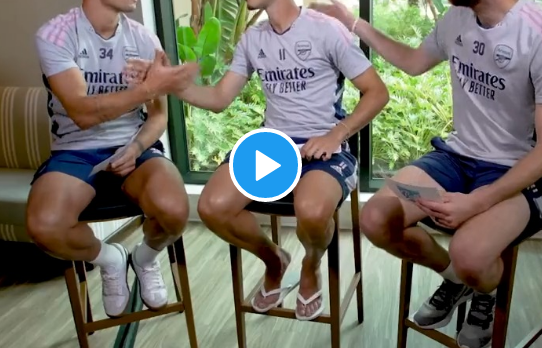 Martinelli enjoyed a strong pre-season before carrying his form into the new season, scoring three goals in his opening eight appearances for the Gunners. The Brazilian winger’s form has seen him keep highly-rated forward Emile Smith Rowe out of the team as the Hale End graduate continues to get up to speed after suffering an injury ahead of the 2022/23 campaign.

Martinelli was left out of Brazil’s latest squad for the final international break ahead of the 2022 World Cup later this year after previously targeting being involved in Tite’s plans for the tournament. Mikel Arteta has lauded the 21-year-old after another excellent performance in the Gunners’ 3-1 win against Brentford on Sunday afternoon.

Many are already aware of the amazing talent Martinelli has on the pitch, with Liverpool boss Jurgen Klopp publicly admitting to being a fan of the young Brazilian. However, the Arsenal star has now revealed he has an unexpected talent that has shocked fellow teammates Xhaka and Turner.

In a recent video posted on the Arsenal twitter account, Martinelli, Xhaka and Turner play a game of ‘two truths one lie’ in which the Brazilian reveals he has a secret musical talent. Speaking in the video, Martinelli states his two truths and one lie saying: “I made my professional debut at 16, I only started recycling last year and I can play violin.”

Who is the secret violinist in our squad? 🎻

Granit, Gabi and Matt take on the @BallCorpHQ 2 Truths and 1 Lie challenge! 💪

One thing we know is true, they all recycle ♻️🤝 pic.twitter.com/Ttv6J1lj4K

Turner responded: “If he actually does play the violin we need him to play for us right after this!”

Martinelli revealed his lie to be that he only started recycling last year. The Brazilian added: “The second one was the lie! I used to play violin and still do!”

Xhaka tries to top the Brazilian’s talent by revealing he can speak five different languages, but it’s Martinelli that wins the game with the Swiss midfielder and summer signing unable to guess his lie correctly. Arteta will be hoping the 21-year-old winger can orchestrate some more chances in the huge clash against Spurs following the international break.