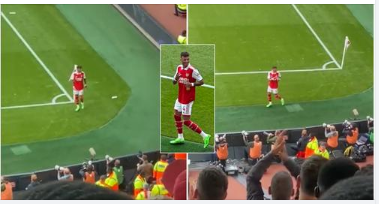 The Englishman has made the right-back position his own for Arsenal this season.

He was in the starting lineup yet again for the north London derby at the Emirates Stadium and played an integral role as Arsenal ran out 3-1 victors.

But second-half goals from Gabriel Jesus and Granit Xhaka gave the home side all three points.

White played 89 minutes before being substituted for Takehiro Tomyiasu.

The 24-year-old was made to leave the pitch at the nearest exit.

That meant he had to walk around the pitch and past the travelling Tottenham fans on his way to Arsenal’s bench.

Ben White gesturing the score ‘3-1’ with his fingers to the Tottenham fans that were left in the stadium as he departed the pitch following his substitution in the final minutes of the match today. 😍❤️ [@jacktherigger_] #afc pic.twitter.com/RuJNn1V8hs

The Spurs fans made their feelings to White known.

So, White decided to get some back as he made a 3-1 gesture with his fingers towards the Spurs fans.

The moment brings back memories of Theo Walcott.

Walcott had to be stretchered off and was taking some flak from Spurs fans. While he was being carried from the pitch, he made a 2-0 gesture with his fingers and had a beaming smile on his face. Arsenal remain top of the Premier League table and Arteta, speaking after the game, said he was pleased with how his side was performing.

04/01/2014: Walcott suffered a ruptured ACL in the 2-0 win over Tottenham in the FA Cup. While being stretched off, Walcott reminded the Tottenham fans of the scoreline. #afc pic.twitter.com/9JaybdWgpI

“It’s great always looking at it and seeing the club where it is, in this position. It’s great, it gives you a great feeling obviously. But we are focused. It is a really hungry and humble team, believe me,” he said, per Arsenal’s official website.

“We know where we are. There is nothing that we have done yet, and there are still a lot of things to improve, and that’s the direction that we are taking.”

Arteta isn’t getting carried away, though, and refrained from calling his side title contenders.

He added: “I’ll leave that to you guys, honestly. We are just at the start, and we are really happy with where we are, and understanding that you cannot control [everything]. Because emotion is related, and the table says what it says, but it is not something that we look at.”