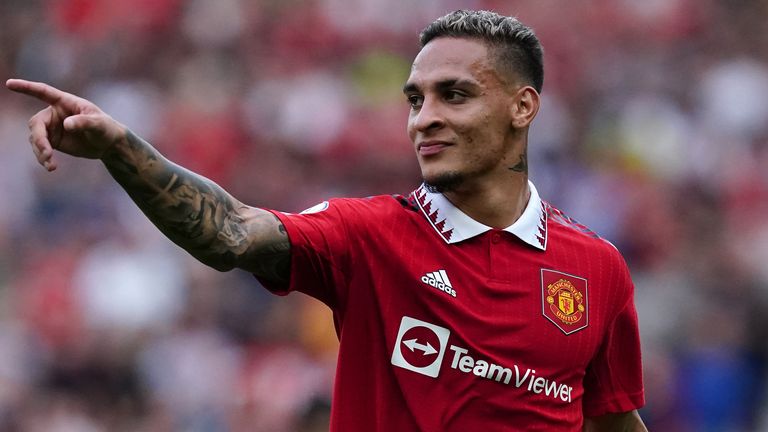 Antony expects his Manchester United debut to be an omen of things to come after scoring in Sunday’s 3-1 win over Arsenal.

The former Ajax winger, recruited for an initial £81.3million (€95m) in a deal that was sealed on Thursday, became the 100th Brazilian to play in the Premier League.

He started and played for almost an hour before being replaced by Cristiano Ronaldo, marking his first appearance for the Red Devils with a sharp finish in the 35th minute.

Arsenal equalised moments after his departure through Bukayo Saka, but Marcus Rashford scored twice to ensure Antony’s United bow was a successful one.

At the age of 22 years and 192 days, Antony became the youngest Brazilian to score on his Premier League debut.

Acknowledging the success of his Old Trafford bow, he wrote on Twitter: “What an incredible day! A huge thanks to all MU staff and my teammates!! I’ll never forget this day!

“To United fans, all my affection for this reception! Let’s go for more! That’s just the beginning!”

The deal for Antony may ultimately cost United £86million (€100m), but it will be money well spent if he turns up big performances against rivals such as Arsenal, whose early lead at the Premier League summit has been trimmed to one point after the sixth round of games.

Former United captain Roy Keane believes Erik ten Hag has worked wonders to turn around a team who lost 2-1 to Brighton and Hove Albion and 4-0 to Brentford in their opening two games of the season.

What an incredible day! A huge thanks to all MU staff and my teammates!! I'll never forget this day! To United fans, all my affection for this reception! Let's go for more! That´s just the beginning! 🔴⚽️ @ManUtd #Reds #United #MUFC #RedDevils pic.twitter.com/pKdHs5sAy2

This United team are only the third side in Premier League history to win four in a row after losing their opening two games in a season, after Tottenham in 2011-12 and Arsenal in 2018-19.

Manager Ten Hag arrived from Ajax, and by bringing Antony with him as a player he knows well, there is a strong likelihood the move will succeed.

“He’s got a group of players he’s happy with and can work with,” Keane said on Sky Sports.

“He’s obviously been backed in the transfer market, which helps, and he knows some of the personalities he’s brought in.

“I just think there’s a bit of a character building with this team, there’s personalities in this team. The place was bouncing, and the feelgood factor is definitely back at the club.”