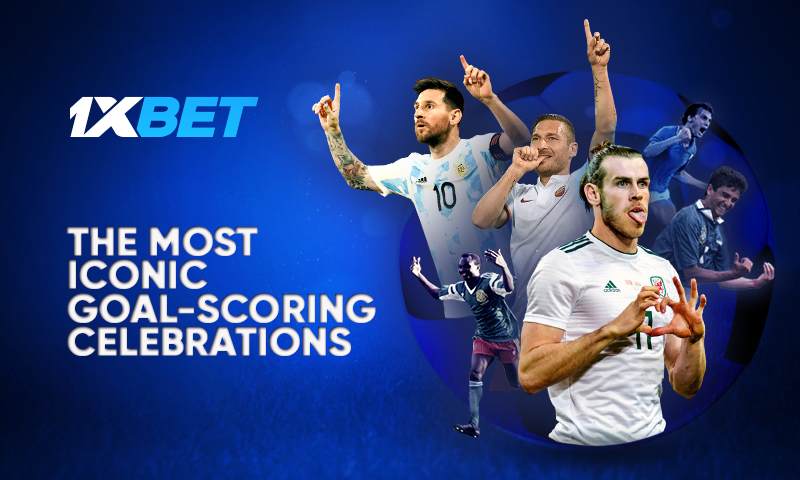 1xBet recounts the most iconic goal-scoring celebrations that have changed world sport, popular culture and even the video game industry forever.

For almost a hundred years, the player who scored a goal threw his hands up in triumph (his partners did the same), the captain shook his hand, sometimes hugged him, and the whole team trudged towards the centre of the pitch. One day, however, the situation was about to change.

1958 World Cup, group stage match between Brazil and the USSR

Although the Brazilians opened the scoring as early as the 3rd minute, it took them quite a while to consolidate their success. However, 13 minutes before the end of regular time, Wawa, the future champions’ number 20, scored a double. It was a goal that secured the group exit and Pele & Co showed the cold Sweden how they rejoice in Brazil: their partners threw their forward to the ground and started to peck and kiss him so that, as Pele recalled, “our good doctor brought him to his senses for a few minutes”.

It wasn’t that no one had shouted on the pitch before the Italian Tardelli – they had, and believe me, quite loudly. However, after Marco scored his second goal against Germany (the Italians had won the final 3-1), he made an incredibly emotional run, accompanied by a wild roar for the winner. The cameramen were in awe, with the race being broadcast on every television channel in the world, but few could hear the scream itself as the packed Santiago Bernabeu stands were ready to explode with displays of delight from the Italian tiffosi. Nevertheless, Tardelli’s Scream is memorable for every Italian who watched the 1982 championship match.

Hugo himself may not remember the first time he did a somersault, but his acrobatic stunts and the goals he scored were masterpieces. Sanchez not only did somersaults – he scored a host of goals with backhanded shots and all types of side scissors, was La Liga top scorer for four years in a row and won a host of titles with Real Madrid. As FourFourTwo rightly pointed out, he was a YouTube footballer before YouTube even existed.

In 1990, Cameroon veteran Roger Milla was already 38 years old and playing peacefully at the Saint-Pierroise club from the Indian Ocean island of Réunion. Roger was not going to the World Cup as he had finished his international career back in 1988. All that changed was a call from Cameroon’s president, who asked the famous forward to join the national team at the World Cup in Italy. Needless to say, the Old Lion simply could not refuse.

Milla scored his first goal in the group stage match against Romania. After that, he ran to the corner flag and began to dance the fiery Cameroonian Makossa dance. Amazingly, Milla did not rehearse his dance, as he was not sure he would be allowed on the field. In any case, his dance has forever changed the celebration of scoring goals in modern football.

1994 World Cup, ¼ final match between Brazil and the Netherlands

In the 62nd minute of the match, Brazilian forward Bebeto gracefully beat the opposition defender and goalkeeper, rolled the ball into the empty net and began to rock the imaginary cradle of his newborn son Matthäus, named after the German captain and born two days before the game. Bebeto was joined by his partners Romário and Mazinho and the gesture became iconic and every footballer in the world now celebrates the birth of their child this way.

Football and politics are not linked only in the sweet dreams of FIFA officials. That’s why on 20 March 1997, Merseyside player Robbie Fowler marked the scoring not with a silly gesture, but with a reminder of the five hundred Liverpool dockers who had been sacked since 1995. This original idea earned Robbie a fine of 2,000 Swiss francs (paying not for the slogan, but for the raised shirt) and the eternal respect of the fans.

It is now only a fraction of the people of Rome and relatives of the players who cheer for Roma. In the mid-1990s, however, the Italian league was still the strongest in Europe, with the whole world cheering on the Italian teams and the media avidly catching every gesture of the famous players. We couldn’t find the exact details of the match in which Roma captain Francesco Totti first started sucking his thumb after scoring, but we have reason to believe that it was in the 2005-2006 season – shortly after the birth of his son Christian. The gesture was originally meant to be a reminder of how much the “Emperor of Rome” loved his children. As time went on, Totti ended his career after playing for Roma for 25 years (!), and his celebration became the domain of popular culture. True, we suspect that 99.9 per cent of players who suck their thumb after scoring a goal these days are not thinking about children at all.

Celia, Leo Messi’s grandmother, did not get to see her grandson at the height of his fame – she died in 1998. However, Messi dedicates all his goals to her, raising his index fingers and looking up at the sky. Celia believed in his talent and always accompanied little Leo to training sessions, as Messi’s first-team football pitch was a long way from home. Moreover, it was the grandmother who persuaded the coach of the Grandoli youth team to let the kid, who was not even 5 years old at the time, take to the pitch in a match against older children. At some point, the coach got tired of arguing and let the little one out at the end of the match. Amazingly, it was on that day that Leo scored his first two goals for his first children’s team.

ALSO READ:  "Chelsea is a Big Club" - Mudryk finally speaks on how he became a Chelsea player not Arsenal

Incredibly, in 2013 Real Madrid footballer Gareth Bale patented a man-made heart, and had to sue Justin Timberlake for it. Although Bale only started showing the symbol during goal celebrations in 2010, his lawyers convinced the court that the footballer’s girlfriend Emma Rhys-Jones had been showing him the symbol since high school.

For more than 9 years, Cristiano Ronaldo has been celebrating scoring goals with a spectacular U-turn, accompanied by a loud shout of Siii! (Daaah in Spanish). The footballer began to celebrate his success in this way in August 2013 during an International Champions Cup game against Chelsea. The match was played in the United States, Madrid won easily 3-1 and that day Ronaldo showed off his leaping number for the first time. Incidentally, the trademark U-turn was added later and made the celebration that much more spectacular.

The most emotional celebrations of goals scored at the World Cup in Qatar are yet to come and 1xBet betting company has prepared carefully for them – we offer plenty of lines and high odds. Also, 1xBet has a handy app, and for those who like live betting there are live betting offices where you can watch matches and open deposits. Place your bets – after all, the championship only takes place once every four years!

Romano reveals Arsenal linked to ‘many names’, speaks on one midfielder