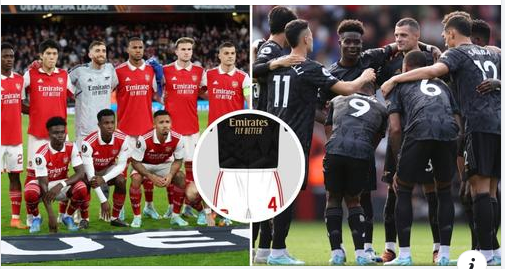 We all know Arsenal love a kit and now they’re set to wear a mash-up for their Europa League clash away at PSV Eindhoven.

In the game at the Philips Stadion the Gunners will have their away shirt and socks paired with bespoke grey shorts from adidas.

It was originally suggested that Arsenal could wear their white home shorts with the away strip but that is not set to be the case.

The reason behind the change for their Group A game is the similarity between the Arsenal strip and PSV’s outfit.

PSV wear red and white stripes for their home kit, paired with black shorts and white socks with red hoops.

ALSO READ:  The exact dates Arsenal vs Man City could be rearranged for as Premier League decision awaits
Advertisement

The north Londoners can’t even wear their third kit as the pink number is too light and will clash with the Dutch giants‘ home effort.

This means the Gunners, as the away team, will have to adapt leaving them to create a bizarre mash-up of the strips.

Arsenal have already booked their place in the knockout stages of the Europa League as they snatched a 1-0 win over PSV last Thursday.

Arsenal are no strangers to a kit clash

Arteta said: “We are qualified so that’s the first step, so really pleased for doing that, now we want to achieve the second one which is to finish first in the group because we know the difference that’s going to make.

“In terms of the games that you have to play and against who, and that’s still something we have to do.