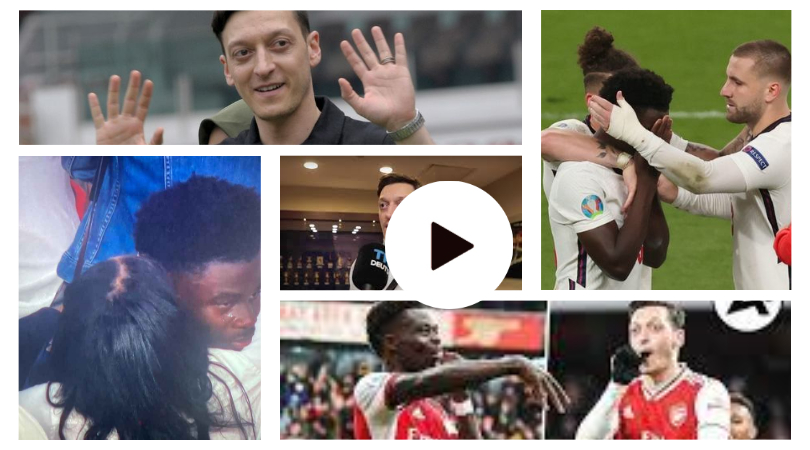 Mesut Ozil has urged his former Arsenal teammate not to feel too despondent after England’s painful World Cup exit.

Olivier Giroud, another of Ozil’s old Arsenal colleagues, ultimately proved the difference with his superb header booking France’s place in the semi-final against Morocco.

Saka’s previous tournament experience ended in personal heartache after he missed the penalty which handed Italy victory in the final of Euro 2020 at Wembley.

Harry Kane was the fall guy from 12 yards on this occasion but Saka, who has enhanced his burgeoning reputation over the course of his five appearances in Qatar, was crestfallen at another missed opportunity for international silverware.

Ozil, however, believes England and Gareth Southgate are firmly on the right track and in the Arsenal winger they have a genuine world star on their hands.

He wrote on Twitter: ‘You don’t need to feel ashamed Team England. A strong performance against the current World Champion, good defending against Mbappe & Co.

‘But France very effective as always. Great game from my brother – the future belongs to you.’

For Saka’s international manager, Gareth Southgate, a period of reflection is on the cards before he decides whether or not he has the energy and drive to mastermind England’s Euro 2024 campaign.

Speaking about his future last night, he told ITV: ‘I think after every tournament we’ve sat and reviewed and reflected.

‘That needs a little bit of time to make sure that everybody makes the right decisions.’

Southgate, meanwhile, was quick to alleviate any blame from Kane on a night he drew level with Wayne Rooney as England’s all-time leading goalscorer.

He said: ‘For me we win and lose as a team, we’ve let two goals in and missed a few chances.

‘He’s been incredible for us and so reliable in those sorts of situations we wouldn’t be here but for the number of goals he’s scored for us.’