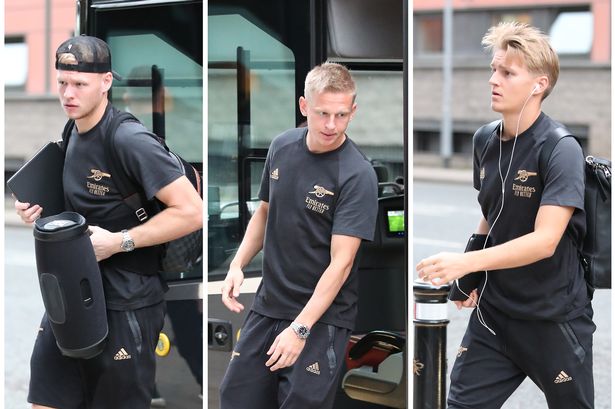 Arsenal face Manchester United on Sunday as two old rivals clash once again at Old Trafford. The game represents an opportunity for Arsenal to send a statement to the rest of the league, as a win would take them four points clear at the top of the Premier League after just six matches.

It promises to be the Gunners’ toughest test of the season so far, and a win for United could see them climb into the Champions League spots and within just three points of Arsenal.

Both Odegaard and Ramsdale have reportedly travelled with the Arsenal squad ahead of the game against Manchester United, according to Samuel Luckhurst of the Manchester Evening News. If both players are available, it will be a huge boost for Mikel Arteta after the duo picked up knocks in the midweek win over Aston Villa.

Despite missing out on Arsenal’s last two matchday squads, Zinchenko could make a return against the Red Devils. The Ukraine international has made the trip to Manchester with the squad, according to Luckhurst.

On Friday, Arteta said: “He missed two games and has not been able to train with the team yet.”

Partey has missed the last two games and is set to miss another couple of weeks of action with a tight right thigh.

Arteta said: “With Thomas, hopefully we are talking weeks or even shorter than that, I hope.”

The Egyptian midfielder played through the pain barrier in last weekend’s win over Fulham. He sustained an injury in the late victory against the Cottagers, but played on, and will now face a lengthy spell out.

“With Mo (Elneny) probably it is a little bit easier and we are talking months,” said Arteta.

The 22-year-old has been unavailable all season after picking up an injury last month, and his return date is unknown.

Arteta said: “He felt something in training, we scanned him, and the doctor came with bad news. It’s a muscular injury; hopefully, he will be back soon. (We don’t know how long for) yet. They need to do another test.”

Related Topics:FixturesTeam News
Up Next