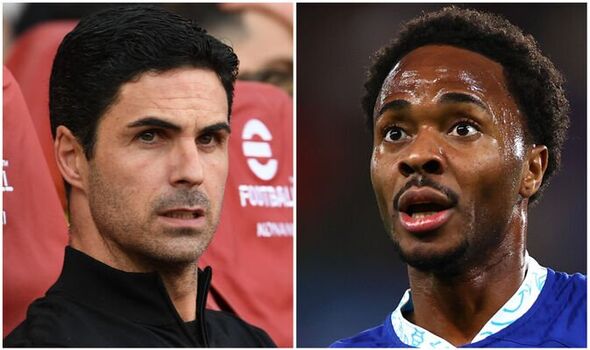 Chelsea star Raheem Sterling has praised Arsenal for playing “beautiful” football ahead of Sunday’s game between the two sides and claims that his side will look to follow in their footsteps to compete at the top again. It comes after a blistering start to the season for Mikel Arteta and his men, who sit top of the Premier League table.

With 10 wins from their opening 12 games, the Gunners will be hopeful of putting up a sustained title challenge in the campaign ahead, even with the congested fixture schedule. Despite their start, the manager has been muted on any potential title push this season, taking it game by game.

“Manchester City and Liverpool are really strong,” Arteta told Sky Sports earlier this season. “They’ve shown that for five years and we haven’t done any of that.”

However, the start for the Gunners shows an element of progression in their project, having put plenty of faith in the Spaniard to build them up to this point. It’s something that Chelsea may be looking to follow, having taken a change in approach since their takeover with new ownership.

A view to a more sustainable transfer policy and youth development would see them move closer to the current Arsenal model, while the hiring of Graham Potter suggests they are buying into a project rather than the ‘hire and fire’ habits of old. It’s the sort of thing that will take time, though Sterling has backed them to do just that, with plenty of praise for Arteta.

Talking with Premier League productions, via HITC, the England international said: “Everyone in the public can see that they have had a great start to the season, they are playing beautiful stuff. They are a team that have been building for a few years now.

“That’s what we are looking to do, to keep building and it’s a game that will be a really interesting one. They are a possession-dominant team, and so are we ourselves. I think it will be a good match.”

With a London derby clash between the two clubs coming up at Stamford bridge this weekend, it will be a huge test of both projects at different stages of their cycles.

VIDEO: ODEGAARD WITH A BRILLIANT GOAL TO EXTEND THE MARGIN