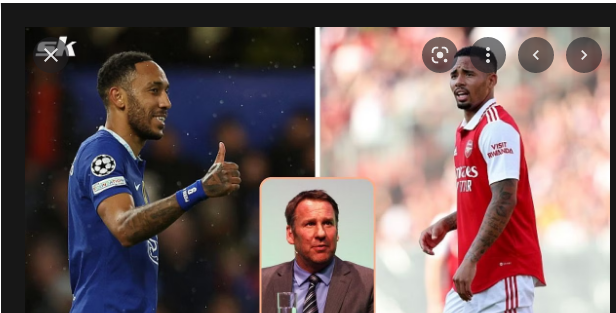 Paul Merson has made his prediction for the ‘massive’ London derby clash between Chelsea and Arsenal this weekend. The Blues will welcome the Gunners to Stamford Bridge on Sunday, November 6 ahead of what is set to be a feisty affair.

Mikel Arteta will be looking to defend his side’s place at the top of the Premier League as Erling Haaland spearheads a Manchester City title charge. Graham Potter, on the other hand, will be eager to build upon the west Londoners’ win over Dinamo Zagreb midweek after Brighton humbled their former boss.

And, Merson believes that Raheem Sterling could have a big influence on the scoreline this weekend depending on whether he is used as a winger or a wing-back. The 27-year-old has featured in Chelsea’s back-five recently and, against competent opposition, the risk hasn’t paid off.

In a column for Sportskeeda, Merson claimed that a title race is out of the Blues’ sight now. The former Arsenal midfielder wrote: “This is a massive game for both teams, for different reasons.

“If Arsenal win, they will go 13 points clear of Chelsea. Let’s be realistic now – Manchester United, Liverpool, and Chelsea aren’t talking about winning the Premier League title. The title race is over for them, and they’re looking for a top-four finish.

“If Arsenal win this game, they’d have to lose five football matches for Chelsea to catch them, and that’s if Chelsea don’t lose themselves. This is a big game for Arsenal, and they’ll need to avoid defeat. They need to make sure they’re not flat-track bullies.”

Merson continued as he delved into the importance of Sterling, claiming that he’s as much of a goalkeeper as the England international is a wing-back. He added: “Raheem Sterling is not a wing-back. It’s a really hard position to play in, and you can’t just put anybody there. Graham Potter got it horribly wrong last week

“Great wing-backs don’t get the credit they deserve – they take one full side of the pitch and they’ve got to go up and down. Raheem Sterling is as much of a wing-back as I am a goalkeeper.

“Arsenal are flying in the Premier League at the moment, and they don’t need the World Cup rest. They’re on a roll and they were outstanding against Forest. I think this match will end in a 1-1 draw, and that’ll be a good result for Arsenal.”