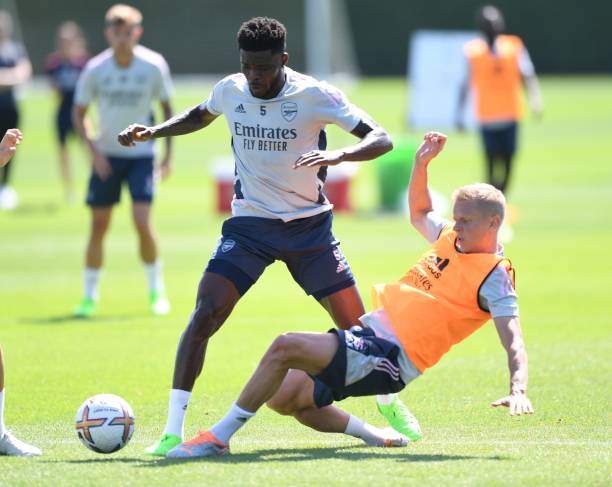 Arsenal have some injury concerns to deal with heading into their clash with Brentford on Sunday.

Arsenal are back in action as they make the short trip across London to face Brentford in their first game in 10 days. The Gunners were originally pencilled in to face Everton and PSV Eindhoven, however, those games were subsequently postponed.

It means some extra time for some of the squad’s key players to make a return to action, with the likes of Thomas Partey and Ben White a concern over the past weeks. Should they be involved, they could be important in a huge game for Mikel Arteta.

Victory will see Arsenal return to the top of the table by the international break, and they will be hopeful of doing just that. With that said, here’s a look at some of the latest injury news ahead of the clash against the Bees.

Zinchenko has been left out of Ukraine’s squad for their upcoming international fixtures, with the nation’s FA claiming that he’s picked up a calf injury that’ll take two weeks to recover from. However, Arteta remained coy when questioned about the injury.

Arteta said at his pre-match press conference: “Again, we have to wait until tomorrow to make that decision. Where he was at that moment and what we have decided to do for the international week doesn’t mean that we will decide the same for the weekend.”

The Arsenal defender was left out of the latest England squad, with rumours suggesting that it could be down to a hip or knee issues before the international break. That has since been ruled out, with Mikel Arteta confirming that White will be available for selection against Brentford:

The midfielder has missed the Gunners’ last three Premier League fixtures. football.london’s Kaya Kaynak understands that Partey missed those games with a tight right thigh, but he is expected to return against Brentford.

The 22-year-old pulled up with an injury during Arsenal’s warm-down session after their 3-1 defeat at Manchester United on September 4. He came on as a late substitute in the game at Old Trafford.

What Arteta has said [September 16]: “That’s been an ongoing issue that he’s had. He’s had some discomfort in the groin area and hasn’t had any continuity this season. It’s something we are trying to assess.”

The Egyptian midfielder is a long-term absentee after picking up a hamstring injury against Fulham last month.

What Arteta has said [September 2]: “With Mo (Elneny), probably it is a little bit easier, and we are talking months.”

The Gunners right-back has been missing since just before the FC Zurich clash last week, picking up a knock in training ahead of the Europa League tie. It remains to be seen when he will make his return to the senior squad.

Nelson hasn’t featured in an Arsenal squad this season and could be set for an extended period out.

What Arteta has said: “He felt something in training, we scanned him, and the doctor came with bad news. It’s a muscular injury; hopefully, he will be back soon. [We don’t know how long for] yet. They need to do another test.”