Prior to his contentious departure from Arsenal, Mikel Arteta relieved Pierre-Emerick Aubameyang of the leadership, and Martin Odegaard was given the reins. The former has since joined London rivals Chelsea.

Mikel Arteta has praised the contributions made by Martin Odegaard, Arsenal’s current captain, despite the fact that his former captain has received most of the attention.

The 23-year-old offensive midfielder from Norway leads the Gunners against Manchester United on Sunday after posting the only 100% record in the Premier League thus far.

In two of the five victories out of five, Odegaard scored. He has moreover demonstrated quiet leadership as the tide in north London’s red district begins to turn. 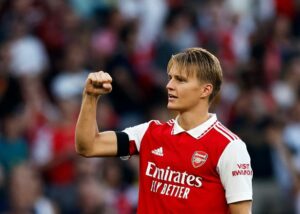 “He’s a really humble, hungry player,” said Arteta. “that has a tremendous quality.

“He puts that quality to the service of the team. He’s always willing to do things for others and he’s a great role model for the rest of the players and staff.”

Asked about Aubameyang, whose Gunners contract was torn up after he was stripped of the captaincy in January, Arteta added: “I wish him all the best. That’s it.”

Arsenal’s stunning start to the season is their best since the 2004-05 campaign, when they went on to finish second.

When asked if the performance supported his choice to delegate control to Odegaard, Arteta responded, “So far, Martin has done that. We attempted to choose the person and professional who, in our perspective, best reflected who we are as a club and what we aspire to be as a squad.

Arsenal’s vulnerability lost them a spot in the Champions League last season, and famed for his team speeches, Arteta confessed his players now need a fresh voice with confidence pumping through their veins.

“In every period a team needs a different coach. What they needed a month ago, six months ago, to what they need now is different. We have to work and adapt and try to understand what the temperature is in the dressing room.”

But Arteta chose to praise the efforts of Technical Director Edu Gaspar and the club for backing the recruitment of five players to the tune of over £100million before pre-season.

It left the squad organised and well-prepared ahead of the current campaign in which they continue to blaze a trail.

Arteta said: “It’s about expectations. Probably everybody was expecting we could do something with the departures we had.