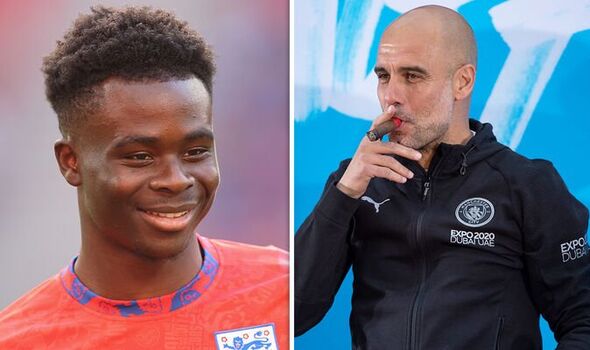 Premier League giants Arsenal have a lot of young talents that they would like to tie up to new deals. One such player is star-boy Bukayo Saka. The young attacker is one of the best playmakers for England in recent times. He won the PLAYER OF THE YEAR award for the national team as well this year. All this, at the tender age of just 21.

Keeping that in mind, Arsenal wants to extend the stay of Bukayo Saka at the Emirates. They know that he is a top player and is wanted by a list of big clubs. Clubs that are willing to pay any amount of money for his signature. With that being said, it is Arteta’s plan to get all such deals closed and fast.

For that purpose, he and Edu have been trying to wrap up any contract extension that needs their attention. The positive start to the new campaign would have helped their case too. The team looks good together and there is a long-term plan here.

What is the main story here involving the future of Bukayo Saka and what update has Arsenal given??

As per a latest report, the Gunners have told sponsors that Bukayo Saka has all-but extended his stay in North London already. It is being suggested that a £52m-deal is all but done, expecting the player to sign soon. Everything seems to be in place, as per the latest hints that are coming out from the club.

This could mean some really special news for the Gooners across the globe. The fans want to retain Saka, with some top names interested in his signature too. Further, the World Cup could be a total gamechanger for his future too. If he impresses in the tournament, he could be one of the biggest names in England.

Already his career is going in the right direction. He has really grown in the last few years and even the likes of Reiss Nelson could see this.

So this is just the perfect time to convince Bukayo Saka to put pen to paper. And as per these claims, he possibly already has a verbal agreement or is just about to sign a deal. Whatever the thing is, this is some really big news. It is huge for Arsenal fans across the globe.

What next for the Gunners this season, are they serious title contenders?

Arsenal want to finish in the top four and possibly compete for a title. This will help them bring in some new names to the club. Last season, they barely finished outside the top four. That was something that did not go down well with the fans. The level of performances in the second-half of the season was just not good enough.

However, Bukayo Saka has really grown as a player and he has carried this team in many games. His performances have earned him a call to the national team as well. He has not disappointed for the Three Lions as well. His surge of place and high-quality play also helped England reach the final of the Euros in 2021. However, a crucial penalty miss (post Sancho’s and Rashford’s) cost them that title.

With that being said, the Arsenal team and Bukayo Saka will want to win something this season. Not just with the national team in Qatar. But for the Gunners as well. Let’s wait and watch if our star-boy can deliver!!