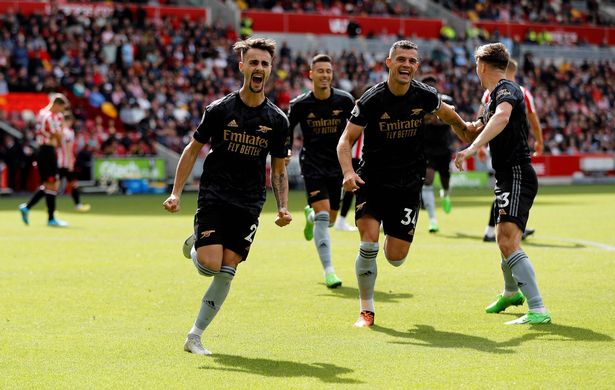 Mikel Arteta has admitted he was left “annoyed” after Arsenal slipped to third place in the Premier League table on Saturday.

Wins for Manchester City and Tottenham Hotspur saw the Gunners fall behind their two Big Six rivals having emerged as the early pacesetters. Entering Sunday’s trip to Brentford, Arteta’s men had lost just one of their opening six games.

And they bounced back from that solitary defeat by producing a commanding performance at the Brentford Community Stadium. Goals from William Saliba, Gabriel Jesus and Fabio Vieira secured all three points for Arsenal as they shot back to the top of the league.

Arteta revealed after the win that seeing his side slip down two places had given his men added determination to defeat the Bees. He was left delighted with his side’s performance as they look to continue their surprise title challenge.

“You can ask me every day. Today we are top of the league, I am so happy. Yesterday [Saturday] I was so annoyed because we lost it and we used that to want to get back there and show that we want to be there,” he said.

“That is what we are going to do – push to be the best we can be. That is the aim. The table won’t lie after 38 games normally. I’m really pleased with the way we played, the performance.

“How we controlled certain areas of the game that are very mandatory if you want to dominate a game against Brentford. I’m really pleased to minimise the opportunities for them.”

In the same fixture last season, Arsenal suffered a dreadful defeat to the Bees on the opening day. And Arteta has been left delighted by the turnaround his side have undergone since that day last year.

“A lot of people described last season here as a bad day, an embarrassing day, I looked at it as a good building character day. You want to become a different team, you have to learn from those moments,” he added.

“And you have to go through those moments and then days like today happen which everyone is really happy in the dressing room with the way we played. We are enjoying our football and it is another step.

“Obviously it made me feel much better because I saw a team that played the way we want to play, the way we train every single day. That shows a lot of character and quality to do what they’ve done on that pitch against a really good Brentford side that you see every week and how much they make teams suffer.”

Arsenal have the chance to pull away from Spurs when the Premier League returns after the international break as they host their rivals in the first North London derby of the campaign. And Arteta is certainly looking forward to welcoming Antonio Conte’s men to the Emirates.

“I want to spend some time with my kids and my family. Whether that will be in London or away and look after the boys that are here because we have quite a few. We need to look after them as well because some of them are injured and start to prepare because we have a beautiful game coming up very soon,” the Gunners boss said of his plans for the break.