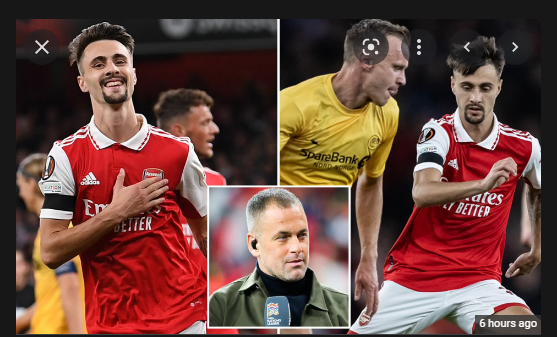 Arsenal registered a huge win over Norwegian opponents Bodo/Glimt in their Europa League group stage clash at the Emirates Stadium on Thursday night. Goals from Eddie Nketiah, Rob Holding and Fabio Vieira gave them all three points to secure a comfortable 3-0 win.

It means the Gunners move top of their Europa League group after two matches played, with a return fixture against Bodo/Glimt to come next week. One of the key points from the game was the strength in depth that Mikel Arteta had to call upon at the start as well as through his substitutions.

“It’s a test for the squad in terms of the numbers and the quality that you have,” the Spaniard said in his pre-match press conference on the schedule ahead. “When you make changes, how much you notice that and at the same time how you are able to consistently perform at the highest level and demand from yourself that you keep doing it. It’s not something that we did last year, we have to do it this year for different reasons, but I think everyone will have to do that after the World Cup especially with the schedule that we all have.”

Arteta managed to make eight changes for the game as well as using all five substitutes come the end, displaying their quality and strength in depth that they can call upon. Summer arrivals have been a huge part of that, with the likes of Gabriel Jesus and Fabio Vieira joining to help the cause.

The latter was a particular standout on the night, grabbing a goal and an assist in the Europa League victory, further pushing his cause for a starting place. It put him central for plenty of praise from former Arsenal defender Martin Keown, who told BT Sport: “You can see Vieira now just getting more and more confident, that corner [before his assist] came from his own bit of class. Odegaard’s the man and when you come in, you’ve got to make your mark and he’s beginning to do that now.”

Former Chelsea and England player Joe Cole agreed, adding: “Graceful. He’s a player that you associate with Arsenal, great feet, great movement, body shape, puts in a great ball, Bodo/Glimt clear but the touch, off the body, what he’s done with the cross is put enough pace on it so when you attack it you only have to guide it. It’s beautiful and it’s moments of brilliance from great qualities, Arsenal were far from the outstanding levels we’ve seen them.”

It remains to be seen if he can outdo club captain Martin Odegaard to earn a place in the side, however his performance along with that of his teammate should breed confidence in Arsenal going forward.