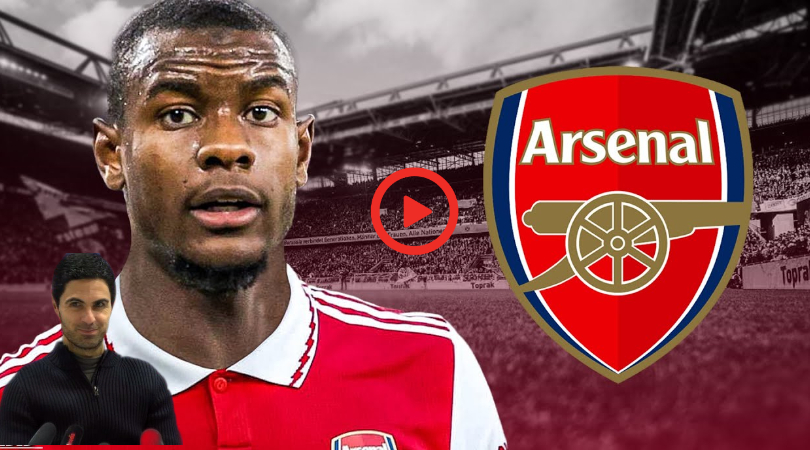 Arsenal proved that they can cope without Gabriel Jesus for the next three months after Eddie Nektiah shone in Thursday’s 3-0 victory over Lyon in a midseason friendly.

But things could get even better for the Gunners, following reports that they could have a second chance to sign one of their top attacking targets from last year. Elsewhere, Arsenal have reportedly secured their first signing of 2023 after agreeing terms with a Bundesliga defender, although they have also had an offer rejected for a World Cup star.

Arsenal have completed a deal for their first signing of 2023, according to reports.

The Gunners are said to have agreed terms with Eintracht Frankfurt defender Evan Ndicka, who will join the north London outfit upon the expiry of his contract next summer. The 23-year-old helped the Bundesliga club to win the Europa League last season.

According to Il Romanista, Jose Mourinho wants to sign the young defender for Roma, but he already has an agreement in place to move to the Gunners on a free transfer next summer, with Mikel Arteta swooping in early to sign the Tottenham and Newcastle target.

Does Arsenal’s defence need upgrading ahead of next season? Let us know your thoughts in the comments section below.

Arsenal may have already found a solution to Jesus’ long-term injury, as it has emerged that they are about to be handed a second chance to sign highly-rated Serbian striker Dusan Vlahovic in January.

The Gunners had Vlahovic at the top of their shortlist 12 months ago following his electric start to the season with Fiorentina, before he ultimately joined Juventus in order to remain in Serie A.

However, according to Italian outlet Calciomercato, Juventus have put Vlahovic on the transfer market just 12 months after he joined in order to help balance the books in Turin, with Arsenal racing into pole position to sign him.

Arsenal have been linked with a move for their former midfielder Yunus Musah following his impressive World Cup with United States, but reports claim that the Gunners have been rebuffed in their efforts.

Musah is wanted by a number of clubs following his performances in Qatar but the Valencia midfielder could be set to stay in Spain after the La Liga outfit took action to keep him at the club with a new contract offer.

However, if he does go, then Valencia are keen to get as much as they can for him, with Italian outlet FCInterNews claiming the north Londoners have already seen a proposal turned down by the Spaniards.