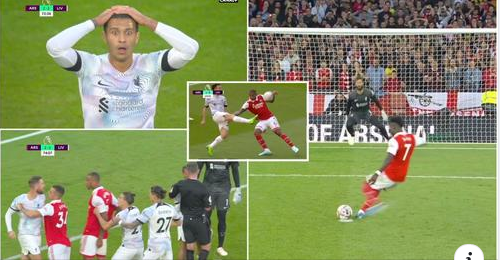 Jurgen Klopp has questioned the decision of Michael Oliver and the Video Assistant Referee to award Arsenal a penalty which ultimately cost Liverpool a point. Thiago brought Gabriel Jesus down inside the visitors’ area after knocking the back of the striker’s heel when challenging for a cross.

There was great controversy as to whether the contact from the Spain international was sufficient to warrant a spot-kick, with several confrontations breaking out among the on-field players. As tempers flared and the verdict was taken to VAR, Bukayo Saka kept his cool before dispatching his effort from 12-yards to hand the Gunners the lead with little under a quarter of an hour to play.

The 21-year-old secured three points for his side in what was a dramatic 3-2 win as the north Londoners returned to the top of the Premier League. However, after the game, the Liverpool boss had a lot to say on the referees’ decision to award Arsenal a penalty – it’s fair to say that Klopp isn’t best pleased to say the least.

Speaking after the game, the German said: “What can I say now about that situation? He thought immediately it’s a penalty which is interesting but his decision.

“Mr England had a look at it and thought as well it’s a penalty. We know in life if two refs think the same that is the truth we have to live with.

“If I see the situation back, if there was contact – and I’m not sure there was – there might have been soft contact, then the player goes again on both feet and then down, that’s an indication that something might have been made up. But not for the refs.

“But they thought it was a clear not handball in the first half when Diogo put the ball on Gabriel’s arm, and we cannot change that.

“Our situation is difficult enough with injuries on top of that, but in a game like this, when decisions go against you it’s kind of typical but it doesn’t help. Now we have lost the game.”

The handball Klopp is referring to was labelled ‘baffling’ by many fans on social media. Gabriel, who was in close proximity to Jota, was seen handling the ball inside his own penalty area, denying the Liverpool forward from delivering a cross into the box.

VIDEO: SALIBA OR VAN DIJK – The Debate Has Finally Ended