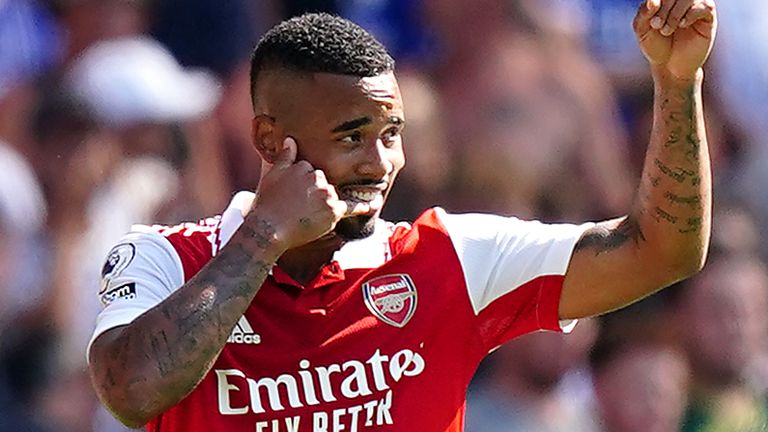 The Brazilian forward started the season in blistering form netting five goals, while also providing three assists, in his opening nine games for the Gunners, but since his north London Derby strike, Jesus has not found the back of the net.

Arsenal are yet to suffer significantly from his missed chances but concern is starting to arise especially as the 25-year-old missed several chances in the games against Southampton and Nottingham Forest, with former Arsenal forward Ian Wright suggesting many will point to how it was made clear when he signed for the club, he is not a natural goal scorer

Speaking on The Kelly & Wrighty Show, he said: “When you look at Jesus and you look at the amount of work he’s doing outside of the box, he has got the energy to get in there. But even on Sunday, he had two very good chances which I think that a player of that calibre, he should have taken them because it was all in his hands – and he didn’t,”

“So that’s a little bit of a worry because people are constantly talking about: ‘well, he’s not a natural finisher’ and everybody’s starting to say: ‘well, we told you so’.

“But we’re talking about somebody who does contribute a lot, will score goals, and as long as the team’s scoring, what are you going to do?”

Although Arsenal returned to the top of the Premier League table with a thumping win over Nottingham Forest on Sunday, there was one glaring negative with star forward Bukayo Saka limping off injured in the first half.

Initially it didn’t look good for Saka but the early prognosis is good as the Englishman was seen leaving the stadium walking freely as well as being spotted in the players’ lounge afterward, as per the Mirror.

While the injury doesn’t seem serious enough to keep Saka out long-term and see him miss the World Cup, he is still a doubt for Arsenal’s fixtures this week, but there are some alternatives Arteta has at his disposal.

Arsenal target Mykhailo Mudryk has impressed his admirers even more following up his wonderful Champions League struck for Shaktar against Celtic with another goal over the weekend in the 2-2 draw with Oleksandriya.

Speaking to Calciomercato, he said: “There is a Spanish (club), a French (club). Arsenal and Manchester City? They are two teams that have taken an interest in the player.

“But there are also other clubs that can spend right away. We do not have to sell. In this team, he is the most decisive. If you want to sign players who make a difference at top clubs, you also need the right money.”

Mudryk has scored five goals in last four appearances for Shaktar as his stock continues to rise and it’s likely the 21-year-old will be at a top European club very soon.