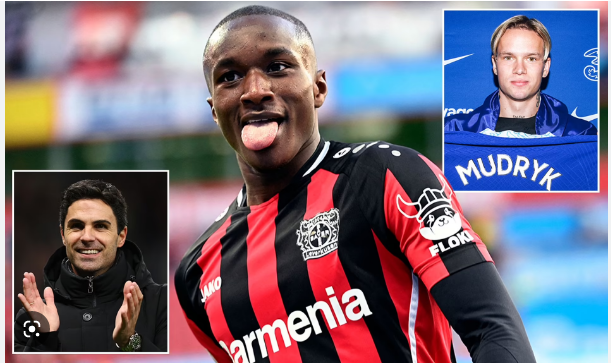 Arsenal are weighing up whether to make an offer for Bayer Leverkusen winger Moussa Diaby, according to Sky Germany.

The TV network claim that the France international is on a list of alternatives after the Gunners missed out on Mykhailo Mudryk to Chelsea.

Diaby has been regularly linked with a move to the Emirates over the past twelve months, although his £75m asking price has put off potential suitors up until now.

Newcastle also tried to snap up the 23-year-old last summer but Leverkusen’s valuation of the player ended the Magpies’ hopes of securing his signature.

From the looks of things, Diaby could still end up being cheaper than Barcelona’s Raphinha, with reports in Spain over the last couple of days indicating that the Brazilian will only be offloaded for €100m (£89m).

Diaby’s performances this season would also suggest he would be the better signing anyway, with the Frenchman racking up eight goals and providing four assists in 22 appearances.