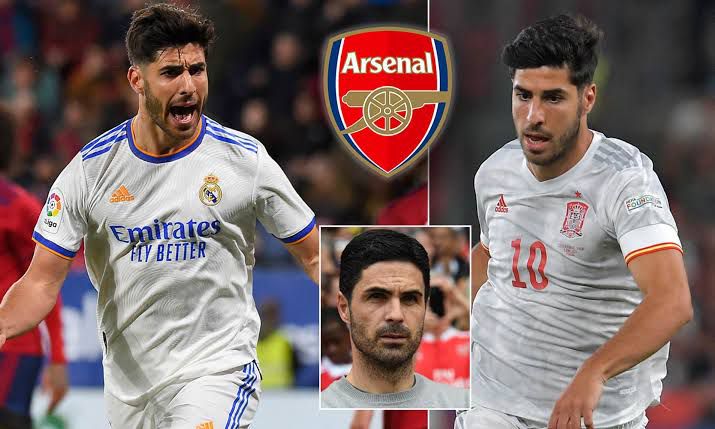 Real Madrid starlet Marco Asensio may be headed to Arsenal of the Premier League, according to trade specialist Fabrizio Romano.

The Gunners are in a strong position to sign the multiple Champions League champion to their roster, according to the Mirror. His representatives were also in London to determine the likelihood of a transfer to Arsenal.

The situation has now been updated by Romano. Here is what he stated on the likelihood of Marco Asensio joining the Premier League during the discussion on his YouTube channel.

“Carlo Ancelotti confirmed that Asensio could leave and there are options for Asensio to be looking around. Let’s see what happens but from what I’m told, his agent is offering Asensio to Premier League clubs.”

“So, keep an eye on Asensio because for Italian clubs, it is not easy. AC Milan was an option but it’s not easy. For Premier League clubs, it’s something that has been discussed with his agent, so let’s keep an eye on Marco Asensio until the end of the market.”

When he scored an incredible goal against Sevilla in the UEFA Super Cup at the beginning of the 2017–18 season, Asensio captured the attention of the crowd. The player’s reputation was further enhanced by two other breathtaking goals in the Spanish Super Cup’s first two legs versus Barcelona.

Fans may also recall his beautiful La Liga goal against Las Pamas. The athlete began to establish himself and gained a reputation for his ability to score miraculous goals.

The Spaniard made 236 games for Real Madrid, making 49 goals and 24 assists. However, his playing time has decreased as a result of the rise of Vinicius Jr. and Rodrygo. Consequently, a transfer for the 26-year-old might be in the works.