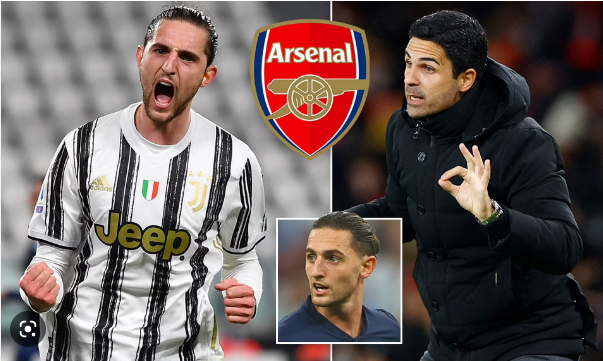 Arsenal have surprised everyone with their spectacular performances this season. They are currently five points clear at the top of the Premier League table, registering 12 wins from 14 matches.

Mikel Arteta’s side are now being regarded as genuine title contenders. However, they need to bring in reinforcements in the January transfer window to keep their title push in the second-half of the campaign.

The Gunners look in need of a central midfielder in order to ease the burden on Ganit Xhaka and Thomas Partey.

Recent reports have linked them with a move for Juventus star Adrien Rabiot and we believe that the Frenchman would be an excellent signing for the North London outfit.

Arsenal should secure deal for Rabiot

Rabiot enjoyed an impressive World Cup campaign for France. The 27-year-old made six appearances in the prestigious tournament, and played a pivotal role in helping Les Bleus reach the final.

He contributed a goal and an assist in Qatar, and also averaged 2.0 tackles, 1.7 interceptions and 0.8 clearances per game.

Unfortunately, Didier Deschamps’ side lost the final match on penalties to Argentina.

Arsenal have also been linked with Aston Villa’s Douglas Luiz and Leicester City’s Youri Tielemans. However, they will likely have to spend a substantial amount to secure a deal for them.

Rabiot would be a cheaper alternative for the Gunners. The 27-year-old’s current contract at Juventus is set to expire in the summer and so his Italian employers are open to selling him for only £13.5 million (as per The Times).

Mikel Arteta’s side need reinforcements in several areas, especially in attack with Gabriel Jesus ruled out for around two months due to a knee injury. And the Spanish boss is unlikely to have a lot of funds available for new recruits in January.

Therefore, we believe that Arsenal should sign Rabiot as he would only cost them £13.5m to sign.