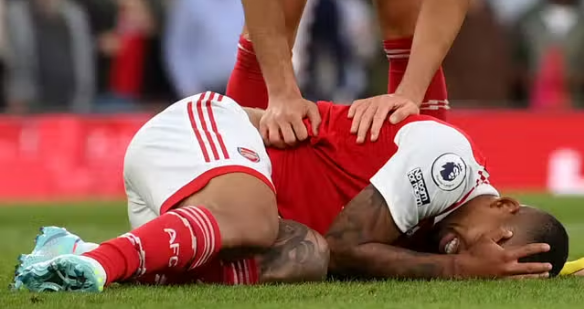 Gabriel Jesus won the penalty for Arsenal’s winner against Liverpool but should he have been on the pitch?

If football’s concussion protocols were followed – ‘if in doubt, sit them out’ is the motto, remember – then you’d have to say no.

After being elbowed by Liverpool’s Konstantinos Tsimikas, Jesus looked out cold. He dropped to his knees and fell on his face.

He lay face-down in the dirt with no movement. His team-mates called on the medics to hurry and flipped him on to his side.

Wouldn’t you think that constituted a ‘doubt’? Most reasonable-minded folks would say, for Jesus’s own safety, he should have been substituted.

The Premier League has the use of concussion substitutes but Arsenal didn’t use one here. The club can say he passed the tests amid his three minutes of medical treatment on the field.

But the replays of that collision with Tsimikas’s elbow made for uncomfortable viewing as Jesus continued, potentially putting himself at risk of another head injury.

ALSO READ:  ‘He Has To Back Up His Words With How He Plays’‘Needs A Loan Spell’Fans Debate Arsenal Star’s Future After Controversial Interview