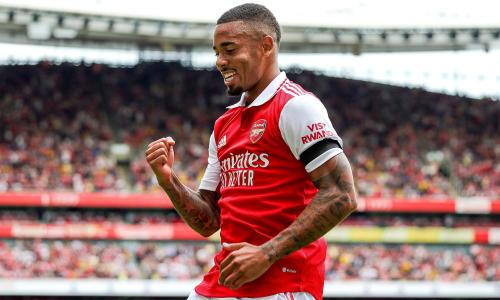 He has five goals in his first four Premier League outings coming into this home encounter. People anticipated that Arsenal’s new number nine would continue to play in his team’s opening match against a struggling Aston Villa squad managed by Steven Gerrard. Bukayo Saka was denied a penalty at the opening of the first half despite Tyrone Mings yanking his shirt in the box being clearly visible on television.

To get that elusive first goal, the North Londoners persisted in pushing and exerting themselves. It happened when Jesus capitalized on Emiliano Martinez’s error to score his third goal of the year and help set up his sixth goal in the 30th minute. His substitute at the Etihad Stadium maintained his electrifying start to life in the Premier League by scoring a hat-trick against Nottingham Forest in the first half at the same time as things were unfolding at the Emirates Stadium.

Good news for Fantasy Premier League owners who had confidence in both players came from how well they performed in the opening period.

But would Jesus have done the same thing if he had stayed in City and gotten to know Haaland?

Martin Keown believes that because Jesus keeps demonstrating this point each and every week, Arteta’s choice to play the £45 million player in the center as opposed to the flank has paid dividends.

“At Manchester City, he spent a lot of time on the flank, but now that Haaland is there, he can play in the middle and catch up. “He seems like he’s on fire from the get-go,” Keown told BT Sport 4.

The former Arsenal defender then gave more details about his goal: “He is the hunter in the box and the first one to react, but Villa’s defense isn’t very good. I don’t know why Konsa isn’t getting to Xhaka fast enough. He could be farther away, which would make him offside, and then Mings would just pass the ball to Jesus, who would sweep it past the keeper. Martinez needs to do better there.”

Arsenal fans- Gabriel Jesus or Erling Haaland? Who will be the better signing? What do you think? Tell us in the section below.

WOW! Saka Reveals The Plan B Arteta Told Him That Ensure Fulham Comeback