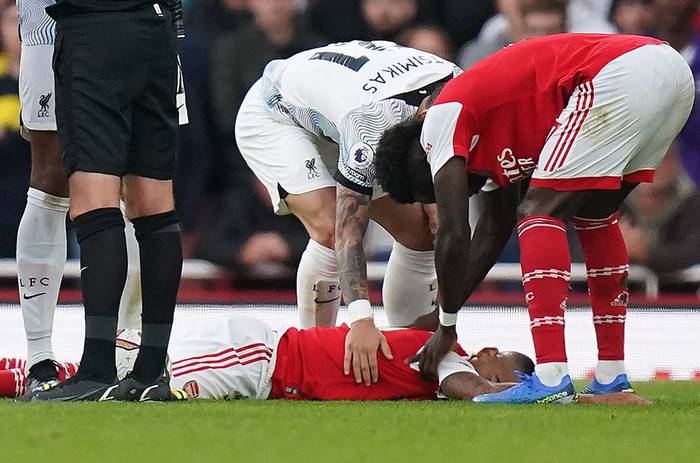 Mikel Arteta has said that ‘a few players’ will not be travelling to Norway for Arsenal’s Europa League clash with Bodo/Glimt. The Gunners boss confirmed that Gabriel Jesus will be left at home to recover from the knock he sustained versus Liverpool.

But, the Spaniard refused to name exactly who else will be not travel with the squad. The north Londoners, who have a game in hand over the Norwegian side, currently sit top of Group A with six points to their name.

For Bodo/Glimt, this could be seen as a must-win game as they look to keep their hopes of qualification from the group alive. So, with that being said, football.london has taken a look at all the injury news Arteta faces for Arsenal’s Europa League clash with Bodo/Glimt.

Zinchenko suffered a knock to his knee in late August before briefly returning to action against Manchester United. He then picked up a calf injury in Arsenal training and has struggled to stay match fit

The Ukraine international, again, returned to action in the north London derby but missed the clash with Liverpool after his calf caused him a few issues. Zinchenko didn’t travel with the squad to Merseyside at the weekend.

With Zinchenko nursing a muscle injury, Arsenal are likely to not want to take any more risks or rush him back. As Arteta said, the club are monitoring him and will be looking to not give him too much too soon with regard to physical workload.

What Arteta has said: “He [Zinchenko] had another muscle injury, and let’s see how it evolves in the next few days.”

Arsenal striker Gabriel Jesus was an injury concern during the Liverpool game, as he took a couple of big hits towards the end of the match. The main worry came as Kostas Tsimikas caught the Brazilian with a flailing arm, sending him to the ground quickly, though he carried on for a short while before being brought off.

It has been confirmed by Arteta that Jesus has not travelled with the squad and will miss the clash with Bodo/Glimt. But, the Spaniard was coy as he explained the striker’s absence.

What Arteta has said: “We thought that with everything he has been through in the last few weeks we thought it was better that he was staying there.

The England international has since undergone surgery which is set to keep him on the sidelines for an extended period, with no return date set as of this moment.

Mohamed Elneny is suffering from a hamstring injury which he picked up against Fulham last month. It’s likely to keep him out until roughly the new year, with Arteta describing the injury as ‘long term’.