Following today’s Europa League draw, it is official that Arsenal will play PSV Eindhoven, Bodo/Glimt, and FC Zurich in the group stages.

We ought to have been delighted to see Arsenal’s name again in yesterday’s Champions League draw. Mikel Arteta’s team had just three games left and was four points ahead of Tottenham to guarantee a return to top European contention. But we squandered it, missing the top four by only two points after dismal losses to Spurs and Newcastle.

Arsenal now have to settle for Europa League football this season but it’s a good opportunity to give some of the fringe players a chance and it’s a competition we can realistic aim to win – which would guarantee Champions League football next year.

We have now been drawn in Group A and will face off against Dutch giants PSV Eindhoven after they failed to make the Champions League group stages following their narrow defeat to Rangers.

Arsenal will also face Norwegian outfit Bodo/Glimt in the group stages along with Swiss side FC Zurich.

It wasn’t the easiest draw we could have got as PSV are a solid team and Zurich are reasonably tough from Pot 4, however, obviously Arsenal should be more than confident of winning the group.

Mikel Arteta will also be happy that we won’t have any long haul trips as Holland, Norway and Switzerland are all within easy reach so the travel won’t be too strenuous on the squad.

The matches will be played on the 8th and 15th September, 6th, 13th and 27th of October and the final group match on 3rd November before football breaks up for the World Cup. 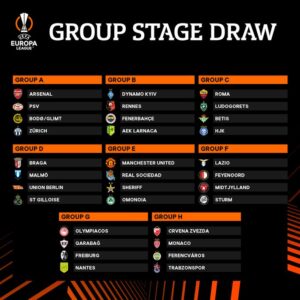