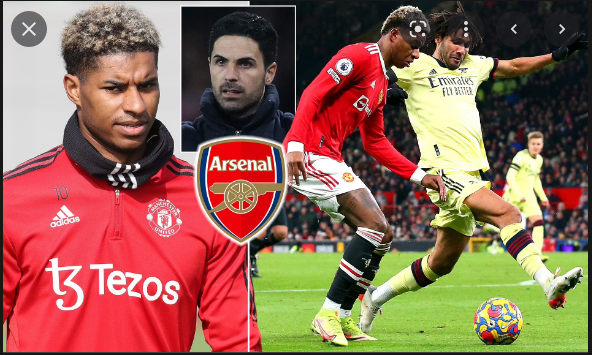 Arsenal are keeping tabs on Man United winger Marcus Rashford ahead of a possible move in 2023. Marcus’ current deal at Man United expires in 2023. After a disappointing few years, many fans at Man United wouldn’t have been too disappointed to see the back of England international, but he’s turned a corner under Erik ten Hag.

Now, Rashford is keeping Ronaldo out of the Man United side, leading the line for Erik ten Hag. However, with a new deal yet to be finalised, he could still leave the club in the coming months. In winter, the English forward will be able to sign a pre-contract agreement with a European club.

One team keeping an eye on his deal situation is Arsenal, and they could make a sensational move for the English attacker in 2023. The report does claim that the Red Devils have the option to extend his contract by a year and avoid him leaving on a free, but the Gunners could still make a move for the attacker.

Losing a crucial figure to Arsenal would be devastating for Man United, but they won’t want to keep hold of him if he doesn’t want to be at the club. Marcus has chipped in with three goals and two assists in seven games in all tournaments this term. Two of those strikes came against Arsenal last month where his double helped Man United beat Mikel Arteta’s side 3-1.