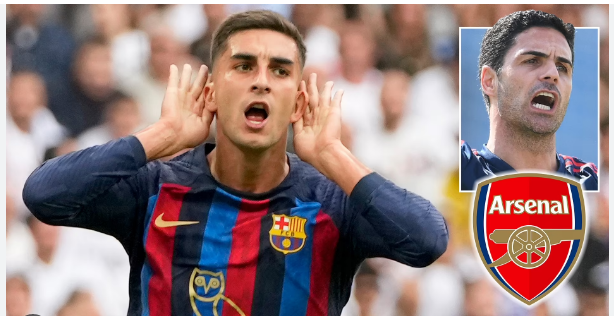 Ferran Torres is reportedly available for sale in the January window, with many teams vying for his signature. North London rivals Arsenal and Tottenham are considering approaching, with both sides seeking attacking players next month.

A year ago, Barcelona president Joan Laporta described Spain international as a dream signing, which Xavi requested the Catalan club’s board to fulfill. Despite a promising start, Torres is somewhat out of sorts in the club, and talk of an early exit looms large on the forward.

The Blaugrana paid €55m last winter to add him, but the summer arrival of Raphinha and the subsequent renewal of Dembele has pushed him down the pecking order. Ferran is struggling to get a consistent run of matches in the team and seemingly does not fit the system under Xavi.

Arsenal are in a tough spot with the winter plans after Gabriel Jesus’s injury. The striker’s absence for the next three months could force the Gunners to sign a replacement striker to keep momentum in the title race. The Spanish coach wants a new wide attacker to rotate with Saka and Martinelli, with Mykhaylo Mudryk their main target.

With Mikel Arteta having worked briefly with the 22-year-old winger at Man City, he will know the footballer well and could try for a move. The Spanish attacker has proved his worth with the national team but is somewhat unconvincing with his club form.