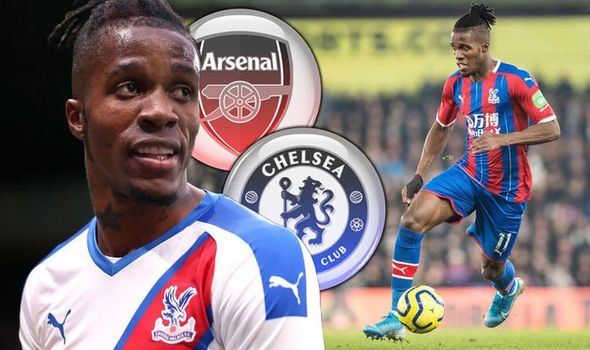 Wilfried Zaha, in his latest response to link from Arsenal and Chelsea, said he is ‘devoted’ to Crystal Palace.

Zaha has been linked to the two London clubs with reports that he would fancy a move any moment from now.

The had recently disclosed how he came close to joining the Gunners but the deal failed as Arsenal opted for Nicolas Pepe from Lille.

The Ivory Coast international, who spent two disappointing seasons at Manchester United earlier in his career, has revived his career with 14 league goals last season and has continued his impressive form this term, hitting the back of the net five times in 11 games.

He has therefore dismissed speculations of a move away, saying he is ‘devoted’ to his boyhood club and insisting his focus is purely on performing for Patrick Vieira’s side, who face West Ham on Sunday.

‘How many times have I seen my name next to transfer stuff – I never speak on these things,’ Zaha told Sky Sports.

‘I don’t know what will happen in the future. I can’t say this is my plan as I’m only fixated on what I’m going to do in training and then on Sunday [against West Ham].

‘I’m very devoted to Palace and that’s all I’m thinking about.’

New 1xBet bonus – your chance to get a free bet