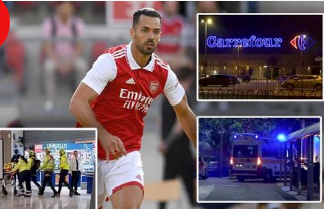 Arsenal defender Pablo Mari, who is on loan at Serie A side Monza, was stabbed in a supermarket on Thursday – and the player’s dad has confirmed he is not seriously injured.

Pablo Mari’s dad has confirmed he has spoken to his son after the Arsenal star was stabbed in an Italian supermarket on Thursday.

Mari, 29, was one of six people to be stabbed in the frenzied attack near Milan on Thursday. All of the victims were taken to hospital and one man sadly passed away. Mari was stabbed in the back.

The central defender’s father has confirmed to Spanish radio station Cadena Cope that on Thursday night he spoke to his son, who told them he was “fine” and that he “loved them very much.”

His father added: “These have been very worrying hours for us. They started calling me at 8pm and my heart has skipped a beat.” However, he subsequently confirmed that being able to speak to his son has eased his fears.

He continued: “Veronica (the footballer’s partner) has not told us how it happened, but she has told us that she has seen a person die in front of her. She has reassured us confirming that they are fine and that everything has been a fright for them.”

Mari will spend the night in hospital where he will continue to undergo observation from medics and he is expected to undergo surgery on Friday to reduce muscle damage to his back.

ALSO READ:  JUST IN! Arsenal enter the battle to sign No.9 Canada international

An Arsenal statement in the aftermath of the shock news read: “We are all shocked to hear the dreadful news about the stabbing in Italy, which has put a number of people in hospital including our on-loan centre-back Pablo Mari.

“We have been in contact with Pablo’s agent who has told us he’s in hospital and is not seriously hurt. Our thoughts are with Pablo and the other victims of this dreadful incident.”

Mari’s on-loan club Monza have also responded to the incident. “Dear Pablo, we are all here close to you and your family, we love you, keep fighting as you know how to do, you are a warrior and you will get well soon,” said the club’s CEO Adriano Galliani.

A further update on his condition was then offered. “Pablo Mari has quite a deep cut to his back, but fortunately it did not reach any vital organs like the lungs or anything else,” it read. “His life is not in danger, he should recover quickly. He has some lesions, but not very serious. He is conscious and getting stitches.”