Arsenal will begin the season with fewer than the 25 players Edu wanted in the senior team. This summer, the team brought in five players, although it was unable to add any significant players to the center midfield or wide forward positions.

After failing in their pursuit of former Leeds United winger Raphinha, who later joined Barcelona, the club had a definite interest in both positions. According to Gunners247.com, Youri Tielemans was a long-time target for Arsenal, and three bids for Douglas Luiz on the last day of the transfer window fell through.

The Gunners have too little, too late. They are now short of what Edu had hoped for before the transfer market opened for the summer.

Too little, too late for the Gunners. This leaves them short of what Edu wanted prior to the summer’s transfer window beginning. 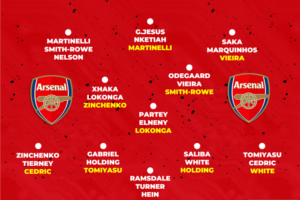 In an interview with ESPN Brazil, he discussed his summertime objectives. “I want 22 outfield players and three goalkeepers, if we can afford it financially and don’t have to make the changes to the roster that we’ve had to,” he stated. I anticipate a hectic summer since there are many things that need to be put in place and that takes time.

Luiz would have been the squad’s 25th member, but the team is now short after losing out on the Brazilian. With four contests to contend with and the Gunners already dealing with injuries, it may prove to be more difficult than necessary.

Having said that, Arsenal will profit from the group’s great degree of adaptability. Ben White has already proven this asset in his game having deputised at right-back and even kept the now fit Takehiro Tomiyasu out of the starting eleven.

Looking at the graphic below it becomes clear to see that the Gunners have three players for every position. However, nine of the eleven roles require a player to operate out of position (highlighted in yellow in the below graphic) to offer Mikel Arteta the coverage.

ALSO READ:  Arteta Reveals What Smith Rowe Must Do To Get Back In The First Team

The right-wing stance is unquestionably the most prominent. With Marquinhos and Reiss Nelson, two much less experienced options who are currently out injured for several weeks, behind him, Bukayo Saka cuts a lonely figure.

Raphinha was a player who Arsenal sought to sign early in the transfer window, but Barcelona’s interest in the player rapidly prevented this. Even though there were ties to more wide players, the team never got close to signing one and yet let Nicolas Pepe to go on loan.

Arteta stated that the club only wanted top-notch players to enter this summer. It is a noble policy and the club are in the competitive position they are in because of it but questions will be raised that they may have undermined the potential of their season by not perhaps slightly lowering expectations, especially when concerning players like Tielemans who the club were never convinced by enough to make an official offer.