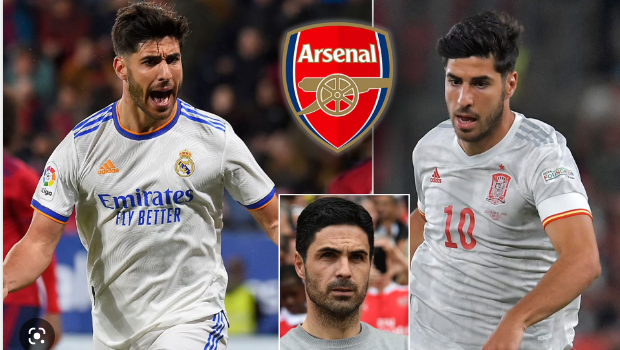 Arsenal plots a winter move for Marco Asensio. Spain international barely plays at Real Madrid, and his deal ends in the summer, as teams, including the London giants, maintain a strong interest. Asensio could leave the Los Blancos when the winter window opens if his future is not sorted.

Marco’s situation is increasingly concerning for all sides, as his deal runs down in the summer. The Spanish attacker will be a good option for other clubs if he becomes available. The Spaniard has dropped down the preference list at La Liga giants over the last campaigns.

This term, the 26-year-old attacker has barely managed to play 178 minutes of La Liga action, which came in minor cameos stretching across 9 matches. It’s not ideal for Asensio with many Champions League titles at Real Madrid.

Los Blancos are reportedly willing to extend his deal, but considering he is not getting enough playing time, and Marco could consider other offers. Real Madrid are readying a three-year contract, but that may not be enough to tempt the 26-year-old winger.

Marco may not be their primary need in the window, as Mikel Arteta seeks a new forward and a central midfielder to bolster his squad. However, he could treat the 26-year-old attacker’s availability as an opportunistic signing and look to make a move.

The Spanish manager could use him and shore up the attacking midfield position where only Odegaard has excelled this campaign. Adding Marco would prove beneficial in improving the creative output of the team.

Arsenal are interested in bringing Leroy Sane back to England as the London giants are plotting a shock move for the winger. Germany international moved to Bayern Munich from Man City in 2020 and since then has been a key part of the Bundesliga giants.

Mane’s arrival at the Allianz Arena was bound to curtail his playing time as Nagelsmann has drawn up his action plan keeping the Senegalese attacker as his focal point.

Mane has had a smooth start on German soil contributing pretty heavily and it has had a vicious effect on some of the attacking footballers including Leroy who has seen himself falling down in the pecking order. Despite his limited playing time Sane has excelled in his new role and has contributed with 16 goal contributions so far.

The Gunners are keeping a tab on his situation and would want to encash this chance. Arsenal have enjoyed a very productive campaign so far and the very much on course to their first PL title since the departure of Arsene Wenger.

But Arteta is not satisfied with his current squad depth and would demand a pair of fresh legs in the winter transfer window. Sane is not hurrying for a move for the time being but further hindrance could force him to rethink his future. Capable of playing anywhere across the front three, Leroy will definitely suit the possession-based system of the Gunners.

Arsenal are interested in Nicolo Rovella and are willing to approach him. U21 Italy international has excelled during his loan spell at Monza, but Juventus are uninterested in a sale. Nicolo’s displays at Monza have caught the attention of many sides, including the PL.

Rovella has played close to 100 first-team matches and has all the ingredients to succeed at a top team. The Old Lady acquired him in the summer of 2021, paying a hefty sum of €26m before loaning him back to Genoa to continue the 20-year-old midfielder’s development.

They wanted him to gain more experience and agreed on another temporary deal, this time to Monza, where the Italian midfielder has been fantastic this campaign. The Spanish manager is in the market for midfield options and bringing someone he can develop into a bonafide star in north London.

The defensive midfield position is a bit problematic for Arsenal considering they need a viable cover for Partey. The Ghanaian midfielder has been impressive under Mikel Arteta, although his injury record tends to hurt the team when he remains absent.

One of Mikel Arteta’s priorities is to bring a cover for Partey as the London giants continue to explore options in the market. Palmeiras’ Danilo is a target in January, but Arteta might look at other ideas, including Rovella. As for Rovella, he-old could evaluate all options at the end of the season. Nicolo would be craving to become a regular part of Juventus.

ALMOST DONE: Arsenal will have to reportedly pay 21 million to sign the Brazilian wonder-kid