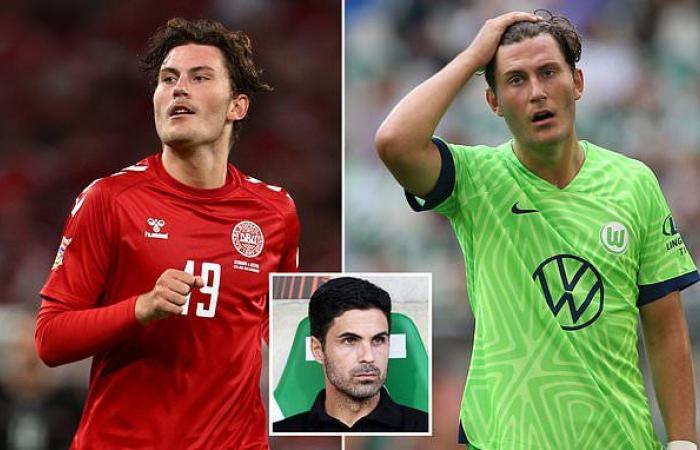 Wolfsburg centre-forward Jonas Wind has admitted that his dream is to play for Arsenal in the future. Denmark international moved to Bundesliga giants from Copenhagen in winter and scored five goals in 14 games for the club. However, Wind is already eyeing up his next move and says his perfect move would be to join the London giants.

‘If we look into the future, Arsenal would be a dream destination for me, as it has always been my favourite club,’ Jonas said. ‘In general, I think the Premier League is the best league in the world, and it would be exciting to play there. But as I said, that’s not what I’m focusing on at the moment.’

‘I’m doing well here in Wolfsburg, it’s a good club for me, and the Bundesliga is a great league to play in.’ The 23-year-old centre-forward has hit five goals in fifteen matches for the Danish national team and is looking forward to making an impression at the World Cup in November.

Denmark have been drawn into Group D with France, Australia and Tunisia. The Gunners splashed out £45m on Gabriel Jesus this summer, so a new striker would unlikely be on the Spanish manager’s radar. However, the Danish centre-forward would present a different option for Mikel Arteta.

It has been a stuttering start to the campaign for Jonas, who has been struck down with a hamstring injury. But Wind hopes to be back after the international break to make sure he is set for Denmark’s World Cup bid.

Arsenal are reportedly in pole position to win the battle for the transfer of Real Madrid forward Marco Asensio. The London giants have held some negotiations over this potential move, with the Spanish coach contacting the 26-year-old forward to discuss a possible deal.

Marco has struggled for game time at Los Blancos recently, and it looks clear he would do well to consider someone like the Gunners if he wants to play more regular first-team football.

Having loaned out Pepe this summer, the Gunners look in need of more options in attack, and Asensio could be a fine signing if the Spanish manager is able to get him back to his best.

Spain international looked a hugely promising young talent when he first broke into Real Madrid team a few years ago, but it’s fair to say his repeated injury problems have slowed him down a bit.

A fully fit Asensio would surely be an asset for the Gunners, and it may be that he could move on the cheap due to his current deal situation. The Spanish winger is ready to be a free agent in the summer, and he could be available for as little as €25m.

“Asensio wanted a new opportunity in the summer, he was offered to English clubs but there wasn’t the right proposal. The situation at Real Madrid is difficult, Asensio wants to play but everything will be decided from January onwards. So far, there’s no agreement to extend his contract,” Fabrizio Romano said.

Arsenal and Man City may be ready to battle it out to add Benfica defender Alex Grimaldo in the winter transfer window, according to reports. The 26-year-old defender is out of contract in 2023, so the Eagles are reportedly open to a sale in the January window.

Alex joined Benfica from Barcelona for less than £2m in 2016 and has played 261 games for the Portuguese giants. Grimaldo never laced up for the Blaugrana first team but racked up 92 games for their B team. The Spanish defender has won three Portuguese league titles and one Portuguese Cup in six-and-a-half years with the Eagles.

The Spaniard is yet to earn a cap for the national team, but the defender is attracting plenty of interest around Europe. The Eagles are willing to offload Alejandro in winter to avoid losing him on a free transfer six months later. Juventus see the defender as an ‘accessible goal’ in the January transfer window given his deal situation.

It is believed he will cost nearly £6m despite being worth £18m. Alejandro played the full 90 minutes with the Old Lady on Wednesday evening in the UCL as the Eagles came out with a 2-1 victory in Turin.

The report adds that Arsenal, Man City, Inter Milan and Barcelona are all keeping tabs on Grimaldo’s situation after ‘gathering information on his situation in recent months’. Arsenal have Tierney and Zinchenko competing for a starting berth under Arteta, while Tavares, who joined from Benfica last year, is currently out on loan at Marseille.