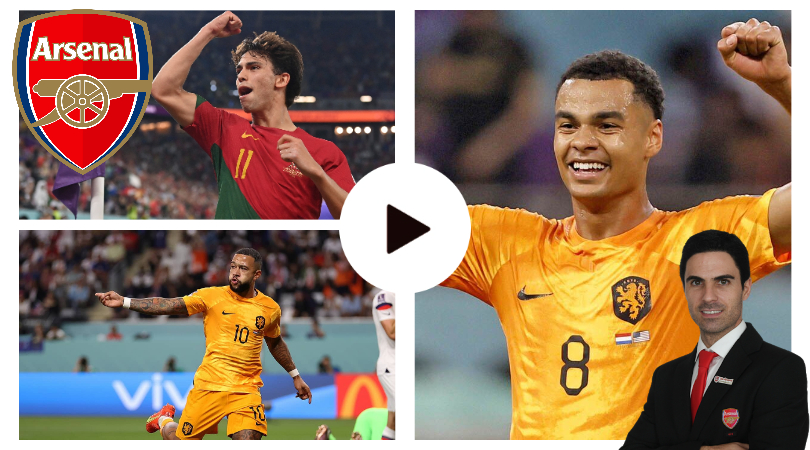 Joao Felix is among several forwards being linked with a move to Arsenal in the wake of Gabriel Jesus’ injury blow.

The £45million summer signing from Manchester City could be out of action until February, in the worst-case scenario, after undergoing knee surgery and Mikel Arteta has insisted the Gunners will make a decision on their January transfer plans when they get a concrete timescale.

“No. We know that he needed some intervention in the knee and we have to take day by day, week by week and see where that takes us,” the Spaniard said when asked if Jesus’ injury will change his strategy. “What it affects is who we are as a team because he gives us so much. What we can do after that when we know the timescale better and we have when we can have him back we will look at the options and try to make the right decisions.”

Whilst the mdia have reported that a wide player and central midfielder are the priority areas Arsenal are exploring amid links to Shakhtar Donetsk winger Mykhaylo Mudryk and Leicester City’s Youri Tielemans, there are suggestions a forward could be signed to ease the burden on Eddie Nketiah.

That is the perfect segue for the talk of a January move for Joao Felix as reports claim the 23-year-old could be on the move next month having struggled to make a significant impact at Atletico Madrid since his £113million transfer from Benfica in the summer of 2019.

According to Spanish publication Marca, Arsenal were leading the race to sign the forward after Bayern Munich pulled out of the race last week, but they will face strong competition from Premier League rivals Chelsea and Manchester United, as well as Ligue 1 giants Paris Saint-Germain.

However, in a potential blow for the Gunners, Italian journalist Gianluca Di Marzio has revealed his Joao Felix transfer prediction. “I don’t think that Joao Felix will go to Arsenal because he wants to play for Paris Saint-Germain,” he said when speaking to Dutch outlet Soccernews. “Atletico Madrid don’t want to lose him at all and they are asking €130/140 million for him.

“Paris Saint-Germain would be a logical choice if he does leave Atletico. After all, there are not that many clubs that can afford to pay him and PSG are interested in young players for the future. They would have cover from Mbappe or Neymar. Or so that they have a replacement when Messi’s contract expires.”

Should Arsenal upset the odds and clinch a deal for the Portugal international next month, then their work from the summer window will ensure they avoid any squad registration issues.

After the January transfer window closes, the north London outfit will be permitted to name an updated 25-man squad for the Premier League, from which no more than 17 overseas players can be named, with the remaining eight places available to homegrown members of the squad.

To be considered home-grown, players need to have been registered with any club affiliated to The Football Association or the Welsh FA for a period, continuous or not, of three entire seasons, or 36 months, before his 21st birthday (or the end of the season during which he turns 21).

The Arsenal players listed as home-grown are Benjamin White, Emile Smith Rowe, Eddie Nketiah, Rob Holding, Aaron Ramsdale, Matt Smith and Reiss Nelson but Karl Hein, Bukayo Saka, William Saliba, Marquinhos and Gabriel Martinelli aren’t included because they are born after January 1, 2001 which makes them eligible to be registered as Under-21 players.

This means the Gunners are under the required limit by three – thanks in part to allowing Alexandre Lacazette, Bernd Leno, Alex Runarsson, Pablo Mari, Lucas Torreira and Nicolas Pepe to all depart one way or another in the summer – and would therefore be able to register Joao Felix in their squad should a deal be completed in January.