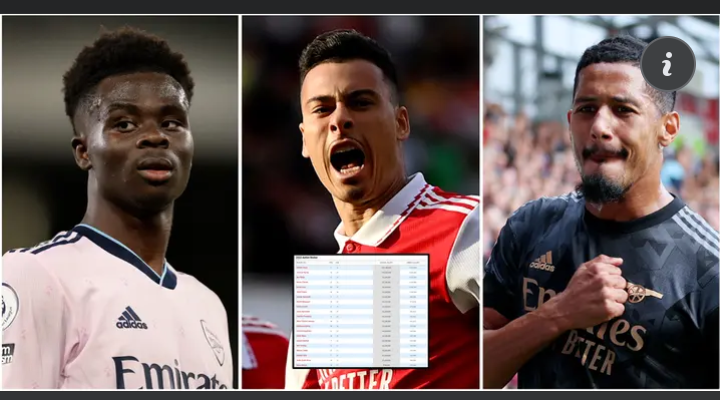 Gabriel Martinelli is reportedly demanding a huge pay increase from Arsenal to re-sign with the club.

The 21-year-old Brazilian has been in magnificent form so far this season and has been one of Mikel Arteta’s most important attacking weapons.

Against Liverpool on Sunday, Martinelli was simply unplayable at times. He petrified Trent Alexander-Arnold with his electrifying pace and movement on route to scoring and assisting in the game.

He now has four goals and two assists in nine Premier League appearances this season.

A return which understandably hasn’t gone unnoticed in the media or with the Arsenal board.

According to the Daily Mail and The Mirror, the club have begun contract talks with Martinelli’s representatives.

The form of their young star has provided them with enough of an incentive to tie him down long-term on a bumper contract.

However, in order to re-sign with the club and commit his future long-term, Martinelli is demanding a pretty enormous pay increase to £200,000-per-week.

That £110,000 weekly rise would make Martinelli the club’s second highest-paid player and would represent a real level of commitment to such a young star.

Will Arsenal be willing to take such a huge risk on a player that hasn’t yet stood the test of time in the Premier League?

We’ve used Spotrac to analyse Arsenal’s existing wage structure and assess how Martinelli would fit into system should he be granted the deal.

Advertisement
ALSO READ:  Why the World Cup Break Could Be Good For Some Arsenal Fringe Players

For Oleksandr Zinchenko, whose salary data wasn’t available on Spotrac, we have used The Sun.

So, meeting Martinelli’s rather steep demands would take him level with Partey as Arsenal’s second highest-paid star, even summiting Zinchenko.

However, from assessing the salaries of the Gunners’ roster, it’s clear that they have a lot of negotiating to do over the coming months.

Saliba and Saka have been standouts for the club so far this campaign and surely won’t put up with wages of just £40,000 and £30,000-per-week for much longer.

Therefore, the pressure is really on behind the scenes for Arsenal to manage this situation correctly.

Arteta’s men haven’t put a foot wrong on the pitch so far, now it’s on the board to do their bit and keep the ship steady off it.