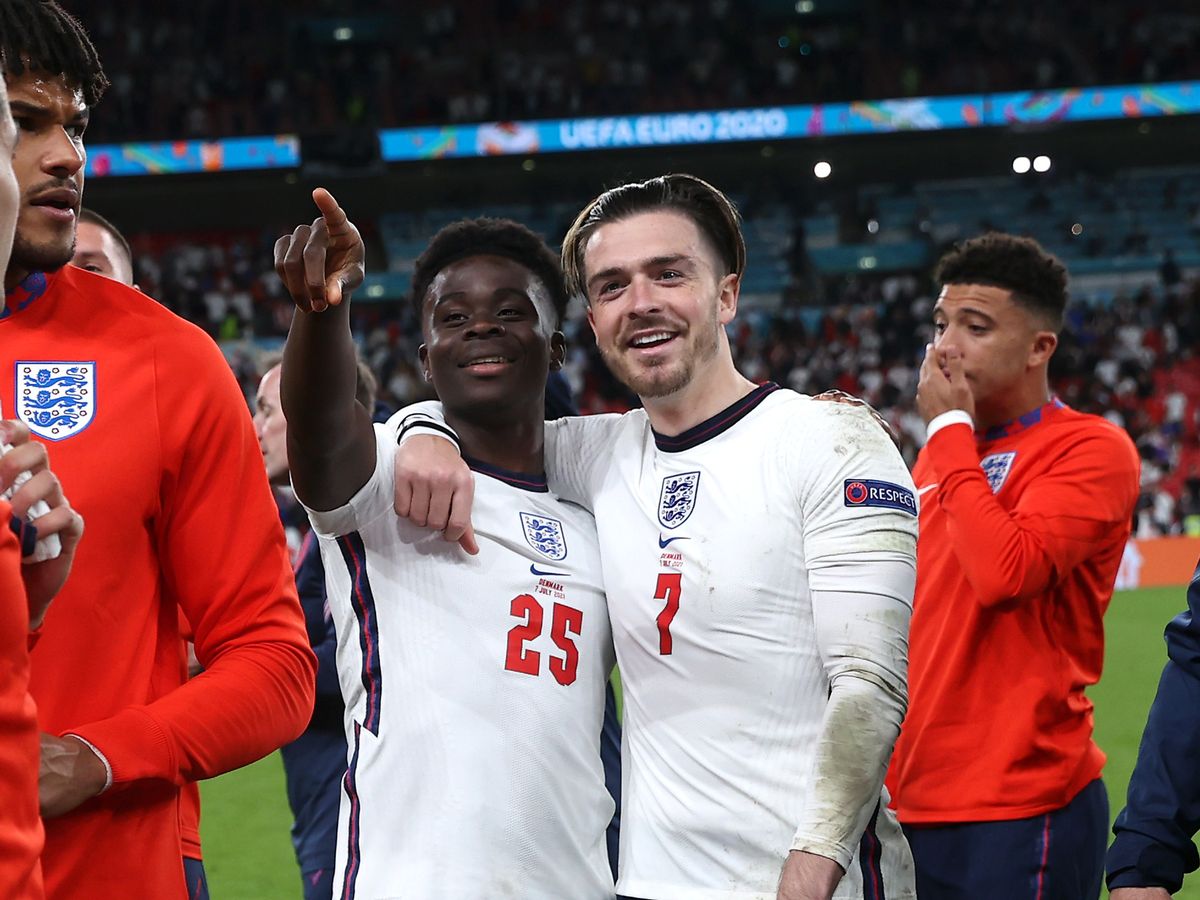 ARSENAL have contacted Eintracht Frankfurt ace Jesper Lindstrom for a potential switch to the Emirates according to reports.

Mikel Arteta is keen on building on his side’s sensational start to the season and the Danish attacking midfielder is reportedly on his radar.

Arsenal have been linked amongst a number of clubs for the England international to head to.

Elsewhere, the Gunners could be forced to play without Emile Smith Rowe for their huge North London derby against Tottenham.

But it has been claimed that Martin Odegaard should be available assuming their is no further damage to his calf.

Hoddle said: “They are a group of youngsters that I think could be looking to challenge the league in two years’ time, let alone we all have to beat Manchester City.

“Perhaps not yet, their battle will be getting into the top four.

“But they have a team and squad that’s going to grow, which is a good sign for Arsenal”

Crooks wrote in his Team of the Week column: “I don’t like Granit Xhaka. I find him confrontational, overly aggressive and altogether irritating.

“Nevertheless, on his day he’s a very good player. He should have left Arsenal years ago.

“However, for some reason he has not only stayed at the club, but also occasionally wears the captain’s armband, such is his popularity these days.

“Against Brentford he looked very impressive and so did Arsenal.

“I would like to know why Brentford didn’t look up for this game, but the Gunners were so good I rather suspect that even if they had it wouldn’t have changed anything – Arsenal were that good. Most worrying”

Roman Abramovich could have bought Arsenal instead of Chelsea but he was mistakenly warned off by Swiss bankers, reports SunSport’s Rob Maul.

The shocking revelations have been made in the book, The Club, penned by two Wall Street Journal writers.

One of their findings was that “Arsenal were categorically not for sale”.

Abramovich instead took over the Blues for £140million and went on to win five Prem titles and two Champions League crowns.

The book also says ex-Arsenal vice-chairman David Dein believed the club’s owners would have cashed in if the Russian oligarch had offered.

Vieira told ESPN Brasil: “It’s a sign that the fans are liking me and what I am as a player. Feeling their support is fantastic.

“I need to improve my English and he helps me a lot with the language. Having Brazilians and Portuguese in the team helped me.

“It’s people that speak the same language. I don’t know much English, but I’m learning and with their help it’s getting easier”

Danny Murphy has slammed Arsenal boss Mikel Arteta for handing Ethan Nwaneri a debut at the age of 15.

Murphy told TalkSport: “I’m not convinced it’s the best move for a young player, I’m really not. I have seen superstars come on the scene at a young age and thrive and go on and carry on.

“But there’s also been a lot who have fallen by the wayside. I think it was a little bit… he’s obviously a super talent, obviously doing well in training, impressing everybody.

“But surely they’ve got other 18, 19, 20-year-olds who are probably further ahead in their development who could have gone on the bench. I think it’s probably trying to keep a young superstar happy a little bit, which is what managers do, I get that.

“But I would be more concerned with sometimes what that can do, because you can elevate a 15, 16, 17-year-old sometimes to a position that becomes very difficult for them to cope with mentally, because they’re already becoming a superstar.

“I imagine his Insta went up by about 300,000 in a day and things like this. People might laugh at this and say stop being cynical and skeptical, but very few players at 17 – never mind 15 – burst onto the Premier League scene and do what Rooney and Michael Owen did”

Wembley chiefs are set to agree to scrap some FA Cup third and fourth-round replays to ease this season’s match congestion.

But while the vast majority of ties will still have second matches if required, teams in the Champions League and Europa League will be offered the option of settling ties on the day.

FA bosses recognise that the issues of an already-congested campaign due to the six-week World Cup break have been exacerbated by the postponements caused by The Queen’s passing.

The seven teams in European competitions face nine matches next month compared to the six games scheduled for the other 13 sides.

This month’s 13 postponements mean Arsenal, City, Chelsea, Liverpool and United will head into the second half of the campaign two Prem matches behind schedule and facing potentially playing 42 matches between Boxing Day and the end of the season.

Brentford star Ivan Toney, with five goals in seven games this campaign, reckons he could score even more playing for a club such as Arsenal or Manchester City.

Toney added: “It is easy to say if I was in their team I would score goals but when you play teams like them they dominate possession.

“So in theory you are more likely to score goals and have a lot more opportunities.

“But you still have to put it in the back of the net so until I am there, who knows?

Toney enraged the Gunners by posting “Nice kickabout with the boys” after his team beat them 2-0 last season.

That tweet was repeated by Alexandre Lacazette when the North Londoners beat the Bees at the Emirates last term — and again by Gabriel Magalhaes when his team won 3-0 at Brentford on Sunday.

But Toney — called up by England for the first time before Friday’s clash with Italy — said: “Once was funny but the second time was a bit cringey.

“I bit my tongue, I wanted to reply, I wanted to nibble. But fair play to them, they played very well. They are a different Arsenal side to what we played before. They are doing well”

Sky Sports journalist Geoff Shreeves opened up in his new book, Cheers, Geoff! Tales from the Touchline, a brush with Arsenal legend Arsene Wenger, who wanted to hit him in 2011.

Shreeves wrote: “I first interviewed Arsene Wenger when he joined Arsenal in 1996. We’d speak 30 times a season, over the 21 years he was in charge.

“I know what makes him tick, he knows how I work but there are still moments when the relationship spills over into antagonism.

“After Arsenal had been beaten 8-2 by Manchester United at Old Trafford in 2011, there was no room for soft-soap questions — Wenger had to face an inquisition.

“I asked if he would resign and if he thought the board would back him. Brutal questions.

“I could see the anger building in his eyes and afterwards Arsenal’s head of media, Mark Gonnella said: “The boss has just told me he wanted to hit you during that interview, he was so angry.”

“Years later, Arsene told me: “Geoff, I wanted to hit you that day, it’s true. But you were not the only one — there were many others”

Arsenal legend Tony Adams, who is set to competes on Strictly, has opened up about his battle with drink and drugs – and how he had a breakdown at 49.

Adams told Sun Online: “I’m 26 years without drinking or drugs and I want to bring some mental health and addiction awareness around life and what I do today.

“I run a business, I run a couple of charities and dance is all part of the process. We use dance therapy at the rehab, and it’s good for the mind.”

Adams continued: “I thought well go for it, you know? I had a mental breakdown when I was 49 and I was working too hard. My new addiction was working too hard and the stress…I had a heart condition. And I went ‘well, that’s it, I’m going to take things a bit easier….after Strictly’.

He added with a laugh: “Make yourself look an absolute idiot!”

Former Arsenal flop Willian cites the lack of connection with the club – with his time there coinciding with playing behind closed doors – as a possible reason for his struggles at the Emirates.

The Fulham star told The Athletic: “I have to feel good, to feel motivated to go to training.

“I wasn’t having that there so I decided to leave. I didn’t see Arsenal fans.

“Maybe I needed to feel the buzz of the crowd, it was something I missed”

Arsenal loanee Folarin Balogun is learning the true meaning of manager Mikel Arteta’s cryptic advice before he left on loan for Reims in the summer.

Arteta simply told Balogun he wanted the whizkid to “develop as a man” during his temporary spell in France – and left it to the young striker to work out how to do it.

Balogun said: “Before I moved, Mikel just wanted me to develop as a man. It was kind of like an open answer and it was for me to interpret what he meant.

“He is a very direct person if he wants to get a message to you in the moment, but I also think he thinks long term. I feel like that is his plan.

“By moving abroad, I’m starting to learn what he meant.

“It doesn’t just mean on the pitch but also off the pitch. I think by the time I go back I’ll be in a better place to compete than I was before I left”

Arsenal Eyeing A Move For This Bundesliga Playmaker: What Will He Add To Arteta’s Side?