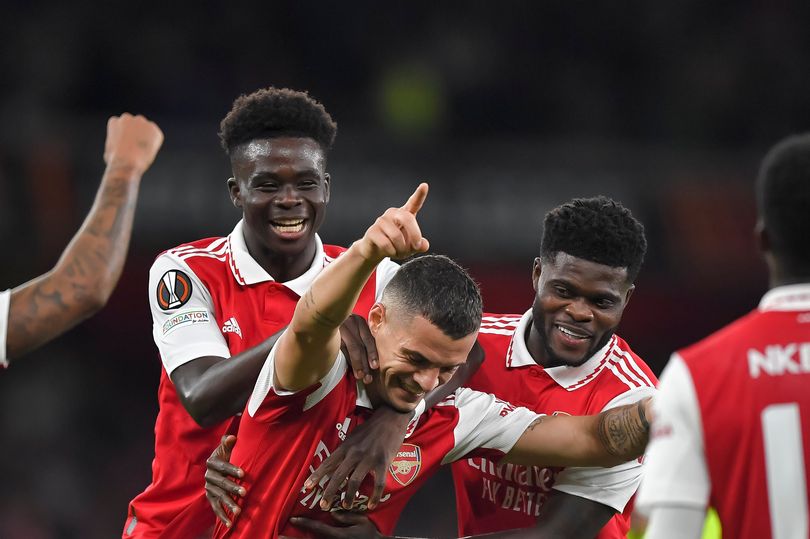 Arsenal qualifies for next round

Qualification to the knockout stages of the Europa League last night with a 1-0 victory over PSV Eindhoven. After a hard-fought 70 minutes, the Gunners secured the victory in the 71st minute through a well-worked Granit Xhaka goal.

Mikel Arteta’s men had a number of opportunities to add to the scoring, with Gabriel Jesus failing to test Walter Benitez properly. Bukayo Saka and Eddie Nketiah also came close, but the Dutch side were resolute in their defensive third.

Arsenal have two more games remaining of the group stage phase of the tournament, with a trip to the Philips Stadion next week and the visit of FC Zurich to the Emirates Stadium.

Bukayo Saka: Arsenal’s most consistent attacking threat on the night. Caused PSV all manner of problems down the right and was involved in most of the chances the Gunners created. 8.

ALSO READ:  Arsenal: £25m signing 'could have been game-changer' at the Emirates
Advertisement

Arsenal technical director Edu Gaspar has a history of signing players from his home nation of Brazil, and he could look to repeat that transfer strategy. As reported earlier this year by football.london, Endrick Felipe’s advisor, Frederico Pena, is chief executive of TFM, the same agency that works with Arsenal star Gabriel Martinelli.

This could hand the Gunners a major advantage should they look to pursue a deal for the talented teenager, as Edu will have already conducted business with him before.

Ex-Gunners midfielder Gilberto Silva has tipped Edu to achieve success in the transfer market once again and sign Endrick ahead of Chelsea and other top European clubs that hold an interest in the 16-year-old.

Gilberto said: “We know the importance in football of being well connected to people, clubs, sporting directors, and presidents of the club, this is how things happen. But there is big competition to get the best players from the best leagues.

“For Palmeiras, they are going to receive a lot of calls from many clubs, the best clubs in the world, to try and bring him to them.”

As per the Evening Standard, Evan Ndicka’s situation is being monitored by a number of clubs, including Tottenham and Juventus, but he’s an option for Arsenal, who want to strengthen their defence.

Ndicka is out of contract at the end of the season, and whilst Frankfurt want him to sign a new contract, they could be tempted to sell in January to avoid losing him for free next summer.

Signing the 23-year-old would result in Arsenal being very close to having Arteta’s ideal defensive line. It would also result in them having the necessarily required depth (two players in each position) to compete for bigger honours. Let’s see how the situation plays out.