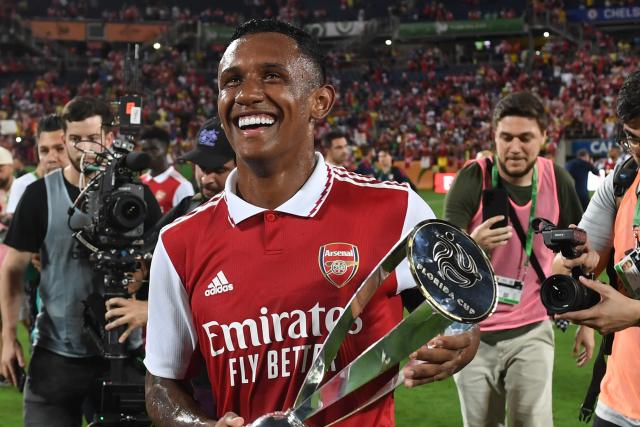 The Gunners saw Thursday’s Europa League clash with PSV postponed due to insufficient police resources but could see one of their Premier League fixtures moved as a result.

Arsenal fixture schedule was already hectic enough ahead of the World Cup but now things have been made even more complicated following the recent postponements of two fixtures in six days.

The Gunners are already attempting to reschedule Sunday’s clash with Everton but must now rearrange this week’s Europa League clash with PSV Eindhoven, meaning October’s Premier League tie with Manchester City could be pushed back until 2023. Elsewhere, Marquinhos is set to be sent out on loan in January just months after signing for the club.

Arsenal ’s top-of-the-table clash with Man City could be put back until next year following the postponement of the Gunners’ Europa League tie against PSV.

Mikel Arteta’s side are due to host City at the Emirates Stadium on October 19, but their rearranged Europa League tie against PSV is likely to be switched to that date as all group stage fixtures have to be fulfilled by November 3, before a month-long break for the winter World Cup.

That means Arsenal’s game against City is set to be put back until 2023, with Pep Guardiola’s side also needing to find space in the busy calendar to play their Premier League clash with Tottenham Hotspur.

Marquinhos could depart Arsenal on loan in January

Would Arsenal be making the right decision in letting Marquinhos leave on loan in January? Let us know your thoughts in the comments section below.

Arsenal could be set to loan out summer signing Marquinhos in the January transfer window just months into his career in north London, despite his impressive debut in the Europa League victory over FC Zurich last week.

The 19-year-old became Mikel Arteta’s first new addition of the transfer window back in June when he arrived in a £3million move from Brazilian outfit Sao Paulo, before registering a goal and assist on his competitive debut for the club in last Thursday’s 2-1 victory over the Swiss champions.

Despite this, however, Arteta is now considering loaning out Marquinhos in January after becoming concerned that he will not get enough game-time in the first-half of the 2022/23 season to develop his game.

Ashley Cole’s move across London was the talking point of the year in 2006. The England international shredded his Arsenal legacy – revealing that he almost crashed his car over their £55,000-a-week contract offer certainly didn’t help – but leaving north London ensured one of the world’s top left-backs spent his best years at rivals Chelsea.