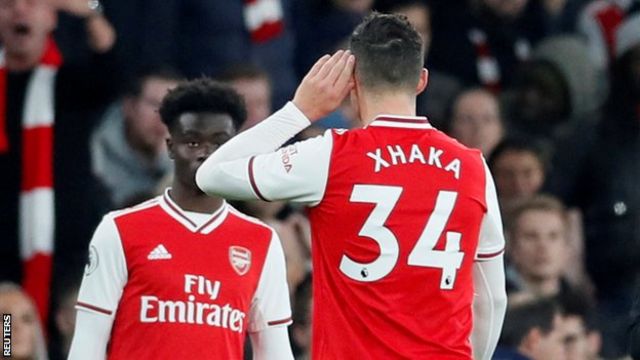 Xhaka was the hero against PSV on Thursday with the only goal of the game, but has now become the first player to speak out on Arsenal’s title ambitions this season.

Arsenal take on Southampton this weekend as they quickly return to Premier League action following Thursday’s 1-0 victory over PSV Eindhoven in the Europa League.

Goalscorer Granit Xhaka once again played a huge part for the Gunners by grabbing the winner, but also hit the headlines after becoming the first player to speak out on Arsenal ’s title chances this season. Elsewhere, Mikel Arteta has defended his decision not to rest Bukayo Saka in midweek, claiming that it would have been a “mistake” to do so.

Granit Xhaka has broken rank to become the first Arsenal player to speak out on the club’s title ambitions this season following their remarkable start to the 2022/23 Premier League campaign.

The midfielder scored the winner in Arsenal’s 1-0 victory over PSV in the Europa League on Thursday and when asked if being top of the league is still the aim by the time the World Cup begins next month, he said: “It has to be. When you are there you have to be there as long as possible in this place.

“I think if we have the chance to stay there where we are at the moment and the World Cup comes, maybe it is a good break for everyone, maybe for us as well, to prepare something else for January.”

Arteta has defended his decision not to rest Saka for Thursday’s Europa League tie with PSV by claiming that it would have been a “mistake” if he had of done.

The Gunners have already played 14 fixtures this season and the Englishman has featured in every single one. With Arsenal looking to continue their title charge, while Saka also has the World Cup with England next month, many believe the youngster should be rested for certain fixtures.

However, Arteta believes that it would be a “mistake” to feel as though Saka cannot play every game, as the Spaniard is fully confident that he is capable of racking up 70 games a season.

Arsenal take on Southampton on their return to action this weekend but Arteta could remain without a number of players for the trip to the south coast.

Gabriel Martinelli overcame his recent bout of illness to feature as a substitute against PSV in midweek, but Oleksandr Zinchenko remained out of action as he continues to recover from a calf issue.

However, matters were made worse when Saka was forced off with a knock in the 1-0 win against the Dutch outfit, and the Gunners are now sweating over his availability ahead of this weekend as he prepares to face a late fitness test.