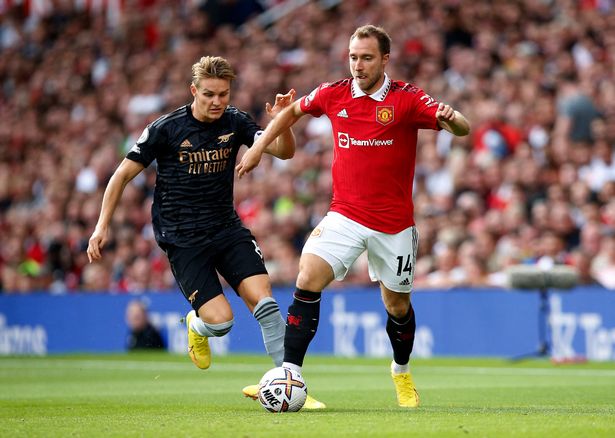 Arsenal lost the only remaining 100% record in the Premier League on Sunday, falling to a 3-1 defeat at Manchester United, but Mikel Arteta’s side are still on top of the table.

After a controversial disallowed goal with the scores level, the Gunners went behind to Antony’s debut strike for the hosts. Bukayo Saka briefly brought them level, only for United to pounce on the break as the away side pushed bodies forward in pursuit of a second goal.

Reaction to the result – and to the use of VAR in general after a controversy-filled weekend – has dominated the discussion in the 24 hours and more after the game. Here are the latest news lines coming out of north London.

Arsenal striker Gabriel Jesus has opened up on the frustration in the dressing room after his team fell short at Old Trafford. The former Manchester City man felt his team were on top for periods in the game, only to be caught out when the opposition hit them on the counter.

“The feeling is frustration because we controlled the game and the first two goals we conceded, we were better than them,” the Brazil international said. “So we are not happy because, in my opinion, we could have won because we play so much better.

“But that’s football. If you don’t go there and kill, you are going to have a big problem – and that’s what happened. Now is the time to learn from it and improve. We are doing so well this season, but there are still things to improve for everyone, as individuals and as a team.”

Christian Eriksen was all smiles after helping Manchester United beat Arsenal. The Danish international was in the thick of things, being on the receiving end of a foul from Martin Odegaard which saw a goal for the visitors ruled out.

“In my opinion, it’s never a foul,” Odegaard said of the decision. “For me, it is very, very soft. On the camera, you can always make it look a little bit worse. It’s frustrating.”

Eriksen, though, was in much better spirits after his team closed to within three points of their opponents. “It was a lovely afternoon,” the former Brentford man told Sky Sports when reflecting on the victory.

What to do with VAR?

Arsenal’s disallowed goal was far from the only contentious incident during a frantic Premier League weekend. Disallowed goals for Newcastle United and West Ham United attracted plenty of attention.

There was also uproar over the decision of referee Simon Hooper to whistle early in Aston Villa’s game against Manchester City, potentially harming the hosts’ chances. The volume of such decisions has left fans walking away talking about little else, but what is the answer?

Arsenal Out, Spurs And Liverpool In As Jermaine Defoe Makes Top Four Prediction