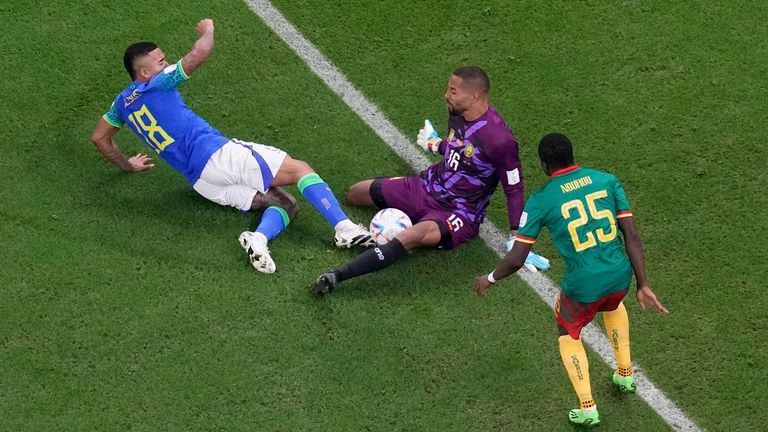 Gabriel Jesus out of World Cup

Gabriel Jesus is set to miss the rest of the World Cup after sustaining a knee injury, according to reports.

The Arsenal forward was forced to come off during Brazil’s 1-0 defeat to Cameroon in the final game of the World Cup group stages after suffering with pain in his right knee. Now football.london understands that the 25-year-old has been ruled out for three to four weeks after scans detected an injury.

Those same reports claim that Jesus had been dealing with discomfort during some matches for Arsenal as they opened up a five point lead at the top of the Premier League before the World Cup break. Assuming the reports are accurate this would see Jesus miss the Gunners first competitive game back against West Ham on Boxing Day at the Emirates Stadium. There is hope that he will be able to return by January though.

The Gunners have been handed a boost in their pursuit of an alternative in VFL Wolfsburg Omar Marmoush. The Egyptian is set to leave the Bundesliga side on a free transfer following failure to extend his stay at the Volkswagen Arena.

Marmoush was linked with a move to the Emirates Stadium in the summer after he admitted his dream of playing in the Premier League whilst on loan with Stuttgart. However, he returned to Wolfsburg and has featured in all 15 of Die Wolfe’s league games this season, scoring three goals in all competitions.

The Egypt international enters the final six months of his contract in January and after talks over a new deal stalled, the German side are now reportedly contemplating selling Marmoush in the winter window in an attempt to raise funds for the 23-year-old. Local news outlet Wolfsburger Allgemeine Zeitung reported the possibility, with them also quoting the club’s sporting director Jorg Schmadtke saying the parties “are considering the right decision for both the winter and summer”.

ALSO READ:  Arsenal receive a huge injury boost before they take on Brentford: Will he be fit enough to start?

The transfer race for Borussia Monchengladbach striker Marcus Thuram will intensify over the course of the next month as his current contract expires in 2023. Thuram has attracted plenty of interest from Europe’s top clubs and will be able to negotiate a pre-contract agreement with a club outside of Germany in January.

Son of French defender Lillian Thuram, the Gladbach striker has scored 12 goals and added four assists this season with only Chelsea target Christopher Nkunku scoring more goals in Germany. His fine form in front of goal has seen Arsenal and Liverpool linked, but the Gunners have been handed a huge blow.

After Sports Bild reported that Monchengladbach have searched for replacements for Thuram, Italian broadcaster Sport Mediaset have claimed Bayern Munich have offered a ‘lucrative’ five-year deal for the forward.