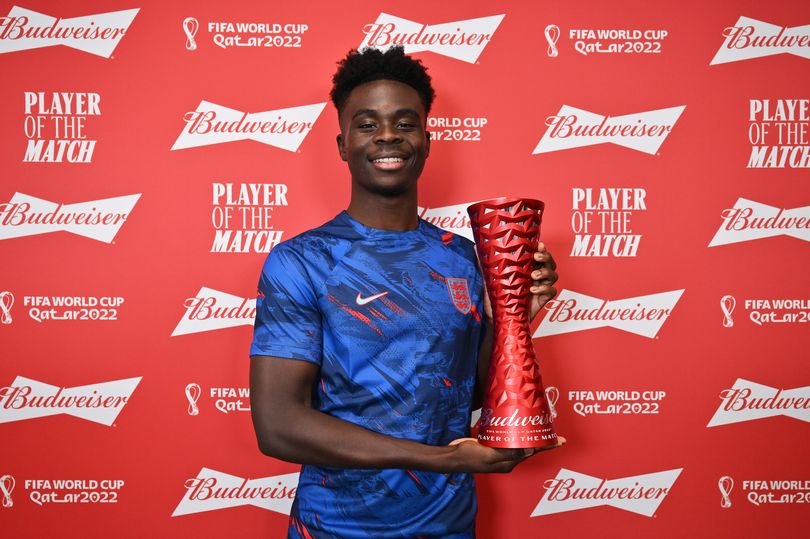 Bukayo Saka scored the first England goal for an Arsenal player at a World Cup since Sol Campbell in 2002 and had a brilliant day for his country.

The 21-year-old scored two of England’s six as his impressive form continued into Qatar 2022. His contract issue isn’t going away though, and the winger has never been more valuable.

Although the Gunners hold no interest in allowing him to leave there is still nervousness as he enters the final 18-months of his current deal.

With a current reported value of over £100million, it would take a huge offer to even get Arsenal to consider selling him, but his form at the World Cup is demonstrating he’s not far away from that being a worthy price tag.

With two goals in the first round of fixtures, Saka is now part of the early group looking to make a move for the Golden Boot. So far he is joint top with Ecuador’s Enner Valencia also getting a brace.

The play from Saka drew praise from Rio Ferdinand after the game. He said: “He’s devastating, sitting at the top of the league with Arsenal confidence must be high.

“Sterling’s play, but it’s the patience, slows the defender down, patient again, it’s a wonderful finish from a player that looked like he seen this situation so many times in his career. I’ve seen it and played with players in this situation, they rush it and get the shot off, and they scuff. That was cool and calm.”

Arsenal transfer target Danilo has revealed what it is that he’s looking for in his next move. The 21-year-old wasn’t available in the summer but the Gunners are still out for a new midfielder and are prepared to go back in to get the Brazilian.

He told UOL Sport: “I see myself mature enough to be able to play in any competition in the world, I’m ready. Palmeiras helped me a lot, from the off, with [director] Joao Paulo [Sampaio]. And I kept my mentality strong with the arrival of Abel [Ferreira].

“I prefer not to get involved with these transfer issues. I told my agent to only talk to me if it’s the right thing. Then we sit down and talk to Palmeiras and decide what’s best for everyone.”