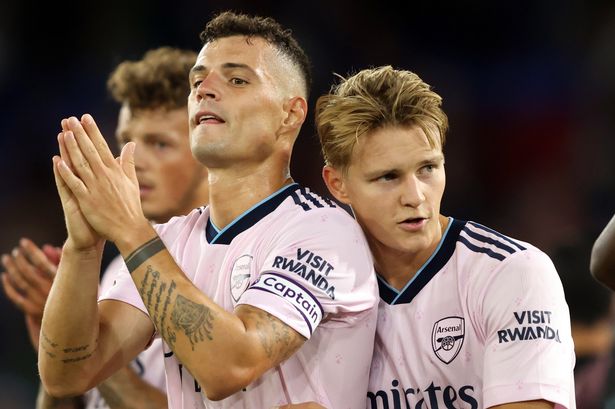 Arsenal defeated Liverpool 3-2 in a brilliant encounter at the Emirates to return to the top of the Premier League and football.london takes a look at some of the viral moments from the match.

Just when you believe things couldn’t get much better for Arsenal, they put in a performance which only raises the expectations even more. An enthralling 3-2 win over Liverpool at the evolving fortress that is the Emirates Stadium has seen the Gunners retain their place at the top of the Premier League following Manchester City’s victory against Southampton.

It was a clash that really highlighted just how much the tables have turned. Arsenal went into the game full of confidence thanks to ten wins in eleven matches across all competitions this season, whilst Jurgen Klopp’s side found themselves part of Liverpool’s worst start to the league for eight years, now ten after yesterday’s defeat. Not that long ago, Liverpool were the team to beat after being crowned champions of England and Europe, but now Arsenal are making a push of their own to reach that very level.

Despite equalisers from Darwin Nunez and Roberto Firmino, a calm and collective Bukayo Saka made no mistake from the penalty spot to ensure all three points stayed put in north London. With so much to take in from 98 minutes of non-stop action, football.london picks out just some of the key moments which may – or may not have – been missed.

In games like this, key battles between certain players are always thrilling to watch. Takehiro Tomiyasu against Mohamed Salah, William Saliba against Darwin Nunez and so on. However, although those match-ups were both a success for Arsenal, it was Gabriel Martinelli who ultimately stole the show.

With one goal and assist to his name, it was no surprise to see the Brazilian receive the Man of the Match award at full-time, yet as it is so often the case with the 21-year-old, it was his hunger and desire that made him stand out from the rest. Although Martinelli ran rings around Trent Alexander-Arnold in the first-half, it was his electrifying race with Luis Diaz that got fans off their seats.

A clearance from Thomas Partey saw the two wingers go head-to-head as they looked to beat each other to the ball towards the halfway line. Despite having a head start, Diaz was swiftly overtaken by Martinelli, who ended up winning a foul for his side. Considering Diaz is easily one of the quickest players in the league, it was some sprint from Martinelli.

Arsenal have now scored 28 goals in all competitions this season, though it’s somehow taken Martin Odegaard eleven games to provide his first assist of the 2022/23 campaign and it was definitely worth the wait. Saka found the Norwegian just outside the 18-yard box, who then spotted Martinelli making a run in behind the Liverpool backline.

Odegaard proceeded to slot a perfectly-weighted ball between Alexander-Arnold and Joel Matip in order to find his teammate, who made no mistake in beating Alisson just 58 seconds into the match. It was a pass even Kevin De Bruyne would be proud of and Mikel Arteta ensured it got the recognition it deserved after the game.

“The way he put the ball to Martinelli in the first minute of the game to make the game in our favour was great. I’m really pleased with the way Martin is playing,” the Spaniard said.

Summer signing Matt Turner came close to making his Premier League debut against Liverpool after Aaron Ramsdale picked up an injury. The Arsenal No.1 appeared to tweak something when taking a goal kick during the first half, before eventually going to ground and asking for medical assistance.

With Ramsdale visibly in discomfort during a conversation with club physios, the camera panned to Turner who was preparing to come on in case the England international could not continue. However, after taking a closer look at the injury, it was decided that Ramsdale could stay on and he didn’t appear to encounter any further problems during the match.