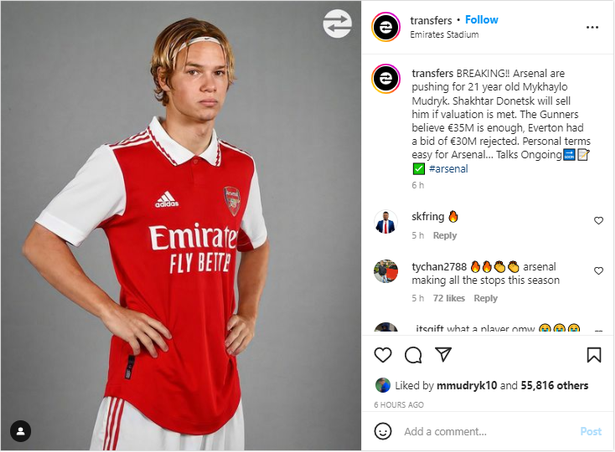 Journalist Julien Laurens has told Arsenal fans that there are no assurances that Mykhaylo Mudryk will make a move to the Emirates Stadium as speculated.

According to him, Mykhaylo Mudryk is ready for the Premier League yet amid reports Arsenal are set to sign him in a £40 million deal.

Mudryk is one of the most sought-after players in Europe after scoring 10 goals and providing eight assists in 18 games for Shakhtar Donetsk.

Reports from the Daily Mirror on Saturday claimed that Arsenal were set to sign the 21-year-old. The report suggested that the framework of a £40 million deal was now in place.

However, Laurens has responded to the reports by expressing some concern about whether Mudryk will be able to make an impact at this stage.

“He’s still someone who needs a lot of space in front of him for his pace to get him going and to make those differences. I don’t think, for example, he will be very comfortable in tight spaces.

“On one vs one, I think there’s so much potential there to exploit that with the right coaching, like an Arteta for example, I think he can improve very quickly. So it will depend on how much money you have to spend. If we’re talking around the 70, 80 million, I think this is too much for someone like him who I really don’t think he’s ready yet.”

The Gunners have been tipped to be active in the January winter transfer window to bring in a winger and a midfielder.

GOOD NEWS: Arsenal told they have a “realistic chance” of shocking Europe to sign this player