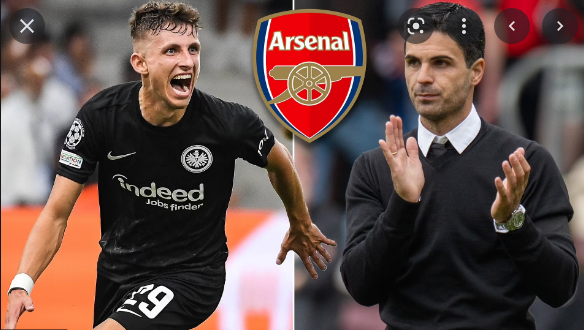 In a recent report, Bild (subscription required) mentioned that Arsenal are eyeing a move for Eintracht Frankfurt playmaker Jesper Lindstrom. It is understood that the Gunners have contracted the representatives of the Danish attacker to discuss a potential transfer next year.

Lindstrom has made a decent start to this campaign after putting in a few productive displays for Frankfurt in the final third. The 22-year-old has banged in three goals in ten appearances for the German club this season across all fronts.

The former Brondby talent deserves some credit for averaging 0.7 tackles and 1.2 shots per 90 minutes in the Bundesliga. However, he needs to work on improving his ball distribution after making just 71.8% of his attempted passes in the top tier of German football (stats via whoscored).

His current contract with the German outfit is set to run out in the summer of 2026. Therefore, the Gunners would have to make a sizable offer if they are serious about bringing him on board this January or at the end of this campaign.

What Will Lindstrom Add To Mikel Arteta’s Team?

Lindstrom is a good tackler of the ball and can press the opposition well high up the field. The five-time Denmark international can use his quickness and agility to make some promising runs with the ball in the opponent’s half when he is playing with confidence on the pitch. He is even proficient at creating space for himself to get a few strikes in at goal.

Advertisement
ALSO READ:  "Such an influential player", "Very difficult to play against" - Pundits single out Arsenal player for praise after crucial victory against Wolves

However, Lindstrom has to find a way to improve his link-up play in and around the opposition penalty box. He primarily operates in the number ten position but can also function as a secondary striker or as a left-sided wide player if required.

There are some concerns over whether Lindstrom can cope with the physicality and high intensity of English football. Still, the pros outweigh the cons of recruiting him as he has the potential to become a future star in Europe.

Therefore, Arsenal boss Mikel Arteta should think about launching a concrete move for the Danish talent next year. We can expect Lindstrom to add more goals and energy to the North London club‘s attack. At 22, the future is quite bright for the Frankfurt sensation. Furthermore, he would even provide some healthy competition for Martin Odegaard and Fabio Viera for a regular starting spot at the Emirates Stadium in the coming seasons.