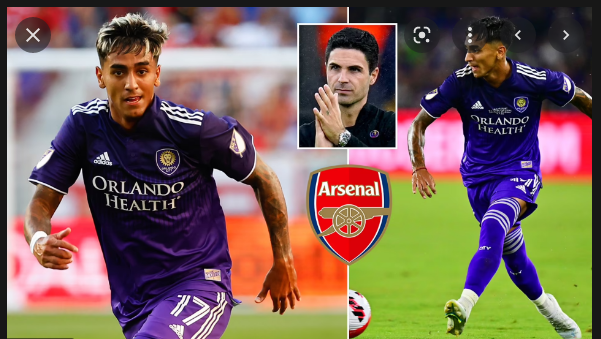 With Arsenal maintaining top spot in the Premier League table 12 games in, optimism over a top-four finish continues to grow. However, last season’s disappointing conclusion will still linger for many.

The Gunners were just one win away from returning to the Champions League stage, but a combination of injuries and a lack of firepower meant they fell short when it mattered most.

Mikel Arteta and technical director Edu have the chance to ensure they are better equipped this time around, however, with the January transfer window just around the corner.

It provides Arsenal with the opportunity to strengthen and it looks like plans are already in place after reports claimed that talks to sign Orlando City’s Facundo Torres were set to get underway. So with that in mind, football.london decided to take a look at what we know about the player and potential deal so far.

Who is Facundo Torres?

Facundo Torres is a 22-year-old winger who represents Orlando City and the Uruguayan national team.

Torres made the move to MLS after joining from Penarol in January this year for a reported transfer fee of around £7.8million. Despite a slow start to life in the States, he went on to score nine goals and provide eight assists in 33 league appearances.

Torres also bagged four goals and set up another two across six cup games, in addition to getting on the scoresheet against Arsenal themselves during their pre-season tour of America.

Now viewed as one of MLS’ most talented players, Torres offers impressive versatility, capable of playing anywhere across the frontline and in midfield as a No.10.

What’s the latest on a potential transfer?

Various reports claim that Arsenal are set to hold talks with Torres’ representatives this week regarding a move in January, while his agent Edgardo Lasalvia also confirmed the Gunners’ interest to ESPN.

However, speaking exclusively to football.london, MLS reporter Tom Bogert said that there had been no approaches as of Monday but added that there was plenty of time for that to change.

What’s been said about Torres?

Speaking after Orlando City claimed the US Open Cup title in September, head coach Oscar Pareja was full of praise for Torres, who played a crucial role in helping his side secure their first-ever piece of silverware as an MLS club.

“I think those players that change the game and take their teams on their shoulders are difficult to find,” Pareja said. “In Facu, we have found that already. This one game, he just took that magical moment that he brought us.”

“He’s a guy where all I have to say is that the sky is the limit. Kudos to the Wilf family, who helped us doing such an investment because I think it’s all paying off today, tonight. There’s more to come from him and I hope we can stay with Facundo as long as we can.”

How much would Torres cost?

Considering Orlando City smashed their transfer record for him just ten months ago, it wouldn’t come as a surprise if they demand double of the £7.8million they paid.

Torres’ valuation would have risen considerably since and it will continue to do so if he makes Uruguay’s World Cup squad.