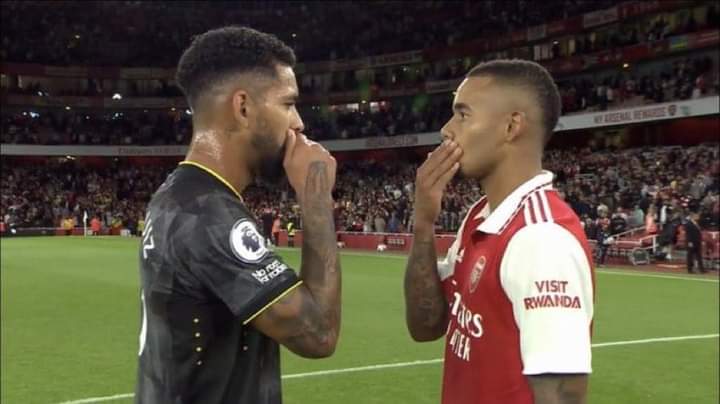 Gabriel Jesus was a big part of Arsenal’s 2-1 win over Aston Villa at the Emirates Stadium on Wednesday.

Jesus moved from Manchester City to north London for £45 million earlier this summer. Since then, he has been a game-changer for Mikel Arteta’s team. In his five Premier League games, the Brazilian striker has scored three goals and set up three more. This shows how important he has been to Arsenal being at the top of the league going into September.

Gunners247 is aware that The Gunners have looked at a number of players in the past, and Luiz is on that list. Now, on Deadline Day, the club is trying to make a deal for Villa star Douglas Luiz. After injuries to Thomas Partey and Mohamed Elneny, technical director Edu is looking for a new midfielder to add to Arteta’s team, and it looks like Arsenal want Luiz.

After his team beat Villa, Jesus was seen talking on the field with a Brazilian player from the other team. Luiz scored a crazy corner kick goal that went right into Aaron Ramsdale’s net. 151 seconds later, Gabriel Martinelli scored the game-winning goal.

Both players had their mouths covered when TV cameras caught them talking, so it’s not clear what they were talking about. However, it may have had something to do with Arsenal’s interest in the 24-year-old. Sources close to Villa are still sure that the club won’t sell their star midfielder, but that could change on Deadline Day since the Gunners are said to be willing to pay up to £25 million for Luiz.

The Brazilian can play as a number 6 or an eight, which would put him in competition with Granit Xhaka and Thomas Partey for a starting spot in Arteta’s team once Partey is healthy again. Luiz may want to move to the Emirates Stadium because his contract at Villa Park will end next summer.

It’s still not clear if Arsenal will be able to sign the 24-year-old before tonight’s transfer deadline. Arteta has made it clear that he wants to add at least one more player to his team before a busy stretch of games in September and October. The group stage of the Europa League starts next week.